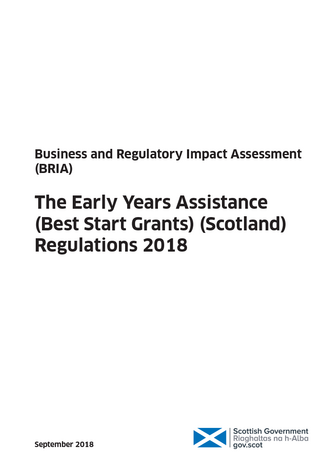 Transfer of powers to Scotland to make provision for Early Years Assistance is set out in the Scotland Act 2016 and Social Security (Scotland) Act 2016. Therefore, not taking over powers from the DWP is not considered to be a viable option.

There are not considered to be any benefits to this option.

If the DWP were to stop making SSMG payments to Scottish applicants and the Scottish Government did not provide a benefit to replace this provision, then around 5,000 families per year would be worse off as they would no longer receive a payment. This loss of support would total around £3m initially.

The Scottish Government could have "lifted and shifted" the benefit with no changes made to eligibility, level of payment, application process or integration with other benefits. However, this would have been inconsistent with the Social Security principles set out in the Social Security (Scotland) Act 2018 [9] and would not have fitted with wider Scottish Government policy on early years.

It would have left a benefit being administered that users found difficult to access due to short application periods and where children were disadvantaged because they are not the first born or live with kinship carers.

The Scottish Government will make first payments of the pregnancy and baby payments before Christmas 2018, replacing the current SSMG. By Summer 2019 it will introduce 2 further payments of £250 during early years. This decision followed extensive engagement with stakeholders as set out in the Consultation section of this BRIA.

BSG will provide up to 3 one-off payments to support families on certain benefits or tax credits with a contribution towards the costs of raising a child at key transition points in the early years. This is intended to alleviate the financial pressures on the household which can have negative effects on maternal health, mental health, parenting skills and family relationships.

Changes to BSG compared to the current SSMG benefit include:

Under proposed eligibility, BSG has the potential to reach (where there is a birth/child at the appropriate age of payments):