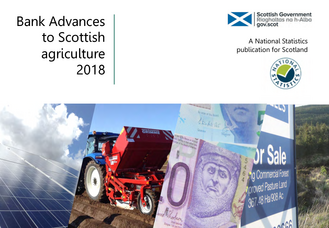 Lending to Scottish agriculture from banks and mortgage companies

The Scottish Government collects data from banks and mortgage companies every year as an indicator of confidence in the agricultural sector.

Bank lending can be a sign of confidence, as banks will only lend when they think money will be paid back to them and farmers don't want to borrow more money than they can repay.

There was a slow-down in the total lending from banks to Scottish agriculture in 2018 compared to the previous year. Lending increased by £22 million, the smallest increase since 2009. This is a rise of only one per cent in outstanding debts from banks and mortgage companies.

The slow-down in the amount of lending may be a sign of uncertainty in the future prospects of agriculture.

Factors that could affect the slow-down might include overall weak growth in the economy, or concerns that interest rates may rise in the future.

We examine lending in real terms to take into account inflation. The Scottish Government uses a GDP deflator published by HM treasury to calculate the real terms value of outstanding debt. The GDP deflator can be viewed as a measure of general inflation in the economy.

The amount of real terms lending from banks and mortgage companies to the agricultural sector fell compared to the previous year.

This is the first year since 2009 that outstanding debt has not risen in real terms.

When the effects of inflation are taken into account, lending to Scottish agriculture fell by one per cent, or £13 million, in the last year.

Scottish agriculture borrows from a number of sources

Lending by source and type 2017

Agriculture's total outstanding debt includes sources other than banks. Data from the Farm Business Survey is used to estimate lending from sources such as hire purchase and leasing of machinery.

Lending lasting over one year is referred to as long term. Short term lending is considered to be anything lasting less than one year.

In addition to the £2.34 billion from banks, agriculture has an estimated £1.2 billion of outstanding debt from other sources. This can include debts from hire purchase and leasing.

The agricultural sector appears to prefer to use banks for long term lending compared to other sources. Long term bank debts rose from 20 per cent of outstanding debt in 2007 to 39 per cent in 2017.

Most loans to Scottish agriculture are long term

Proportion of long and short term lending to Scottish agriculture

Feedback from banks suggests this trend is due to the agricultural sector moving away from short term lending such as overdrafts. This is converted to long term to reduce the overall indebtedness from informal lending.

Total debts are estimated to equal ten per cent of farm assets. This is relatively low since agriculture has a number of high value assets, for example land.

This data comes from the Bank of England 'Industrial analysis of monetary financial institutions' lending to UK residents – All Currencies'.

We use this data to give a UK wide picture of agricultural debt and to provide a comparison to Scotland. The UK data also includes lending to hunting and forestry which is not included in the Scottish figures.

Lending to the UK Agriculture, hunting & forestry sector has slowed, compared to the previous year. Lending to the sector increased by one per cent, less than in recent years and below inflation.

This is similar to Scotland where outstanding debts to agriculture also grew by one percent.

Inflation The rate of increase in prices for goods and services.

Real terms When a value has been adjusted for inflation.

Outstanding debt The total amount of debt a company or person owes that remains unpaid, which we also refer to as lending.

Long term lending Debt due in more than one year.

Short term lending Debt due in less than one year.

Interest Rates The cost of borrowing expressed at an annual rate: the amount of interest that would be paid during a year divided by the amount of money loaned.

This data is collected via the annual Bank Advances Survey run by the Rural and Environmental Science & Analytical Services Division of the Scottish Government. The survey collects statistics on outstanding debts from all banks and mortgage companies that lend to Scottish agriculture.

This publication also uses data from the Farm Business Survey.
More information is available at http://www.gov.scot/Topics/Statistics/Browse/Agriculture-Fisheries/pubfarmborr

The data used to create the charts in this publication are available online in the accompanying spreadsheet.

If you have any questions or comments about this publication, please e-mail agric.stats@gov.scot
or phone 0300 244 9716

You may use or re-use this information (not including logos) free of charge in any format or medium, under the terms of the Open Government Licence. See: www.nationalarchives.gov.uk/doc/open-government-licence/