Contents
An assesment of the De Minimis Exemption in the CFP discarding regulation: for Scottish Fleets
Executive Summary 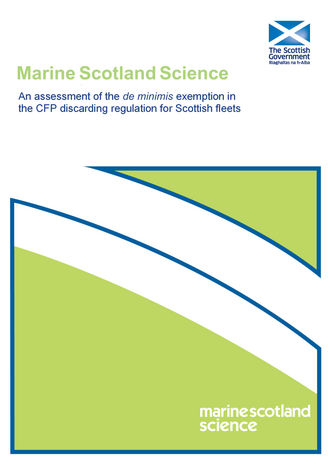 The EU's new regulation on discarding has introduced new challenges to Member States. For the most part these continue to be governed by quantitative non-economic measures, e.g. quotas. However, the de minimis exemption invites economic considerations to justify applicability. In summary, the de minimis exemption (Article 15 paragraph 3(c)) allows for discards of up to 5% (7% in years 1 and 2; 6% in years 3 and 4) of "total annual catches of all species" where either selectivity is deemed "very difficult" or there are "disproportionate costs of handling unwanted catches". It's widely agreed that the purpose of de minimis is to assist in "balancing" the catch ( e.g. STECF 2014).

This new approach for policy requires that economic considerations are used to evaluate this trade-off. Disproportionate costs are directly related to cost-benefit analysis. That is, costs are disproportionate if they exceed the monetised benefits of achieving the discard ban or if they exceed benefits by a certain "safety margin". In addition to the comparison of costs and benefits, the distribution of costs among the affected parties, and the difference between affected parties also needs to be taken into account in the decision-making process.

Two underlying questions that this work will investigate include:

To assist in determining the outcomes, the options identified are evaluated using scenarios for key Scottish fleets; pelagic fleet, North Sea and West of Scotland TR1 and TR2 fleets.

Practically, the allocation has to be done before and not after the event - e.g. pre-allocated to POs, similarly to quota. It is likely therefore that POs would then have direct input into which vessels receive exemption. It is worth noting that gaming issues are thought to be minimal if guidelines can be clearly specified. Alternately de minimis allocations could be held centrally and managed by Marine Scotland if it was felt this would provide more effective use of de minimis.

To measure whether a vessel/fleet is eligible for de minimis, a technical criterion can be established to ensure that unwanted catch is identified correctly. Priority for de minimis should be to stocks and fleets where quota is not readily available. For example, the TR1 fleet indicates very low landings of pelagic species [1] and could apply for de minimis exemption when catching herring and mackerel over their assigned quota. Similarly, for pelagic trawlers catching whitefish.

This test is designed to cross-check fleets and stocks to,

Related tests of assessing if quota is available to land a species from an area and ensuring that a stock remains within safe biological limits are tests that should be applied through the discard plan or management plan at the allocation stage of de minimis.

It is a requirement of the regulation that use of de minimis is properly recorded. This suggests that de minimis even where it is allocated will be limited and will be included in ICES annual management advice, and will influence TACs.

Though considered a "balancing" tool to keep vessel fishing under the constraints of the discarding regulation, its ability to do so must be set against the likely impact its use will have on TACs. Therefore, prioritisation of who will be allowed to access a de minimis allocation becomes a key consideration. This is particular challenge is for multi-species fisheries where quota allocations have not necessarily in the past reflected catch composition. In future they will likely converge more closely over time, helping to drive changing behaviour in the industry.

Defining clear objective criteria will ensure a transparent and impartial decision making process. It is hoped that this highlights the usefulness of such approaches and reduces reservations towards the use of economics in this area.