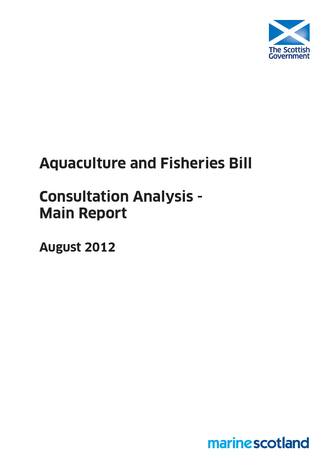 4 Other Comments and Issues Raised

4.1.1 Many respondents provided additional comments on wider issues relating to aquaculture and wild fisheries in their responses. Where possible, these comments have been reported earlier in this report, alongside analysis of responses to specific consultation questions.

4.1.2 The remainder are summarised in the following paragraphs.

4.2 Comments on the Strategic Environmental Assessment

4.2.1 Some respondents disagreed with information provided in the SEA and/or consultation documents, raising a number of issues.

4.2.2 A freshwater fisheries respondent contended that the Consultation Document significantly understated the estimated worth of aquaculture and salmon and freshwater fisheries. Another discussed the contentious nature of the data presented, adding that if no consensus could be reached by stakeholders, then independent research should be commissioned by the Scottish Government to investigate any perceived impacts from finfish farms on the wider environment. A further respondent from this sector felt that this information was optimistic, adding that the numbers of salmon returning to Scottish waters have clearly reduced from those observed 60 years ago.

4.2.3 Several aquaculture industry respondents disagreed with numerous aspects of the SEA and consultation data, with one respondent questioning some of the conclusions of the SEA and evidence behind them. Comments made on the SEA included:

4.3.1 Some freshwater and marine fisheries respondents stated their support for the recommendations of the Mixed Stock Salmon Fisheries Working Group on a range of issues.

4.4.1 Closed containment was raised by several freshwater fisheries respondents. Some felt that the Scottish Government should encourage this, in order to mitigate impacts on wild fish.

4.4.2 A respondent added that they supported the use of public expenditure to support production innovations that also offer environmental benefits. Two freshwater fisheries respondents suggested the use of on-shore tanks filled with sea water to resolve issues with sea-lice and commercially damaging species.

4.4.3 Another consultee called for a phased withdrawal of smolt production in freshwater cages in Scotland.

4.5.1 Several respondents suggested that a hard line should be taken on the issue of escapes from farmed salmon sites. One freshwater fisheries consultee felt that there should be a statutory requirement that operators take remedial action following the reporting of an escape to Marine Scotland. They also felt that genetic sterilisation of farmed fish could eliminate impacts from interbreeding of escaped salmon with wild fish.

4.5.2 Another two freshwater fisheries consultees suggested that consents should not be given for moving finfish farm cages into open waters on the west coast of Scotland ( i.e. the Minch or North Atlantic) as they would be vulnerable to equipment failure in severe weather.

4.6.1 A freshwater fisheries respondent felt that there should be a statutory presumption against smolt-rearing developments located adjacent to river catchments of key importance to wild salmonids. Several voluntary sector respondents felt that Ministers should have appropriate powers to require the relocation of fish farms, where supported by scientific evidence. One consultee felt that this measure should even be applied in situations where farms have already been granted permanent planning permission.

4.6.2 An individual felt that relevant DSFBs should be consulted when an Environmental Impact Assessment ( EIA) for a development is conducted, or when matters relating to Town and Country Planning are known to affect a river system.

4.6.3 A voluntary sector respondent commented that an ecosystem approach to fisheries management should be taken by DSFBs , and promoted by SEPA and Ministers.

4.7 Provisions for Other Species

4.7.1 Several freshwater fisheries respondents noted that the Consultation Document is focused on salmon and sea trout, with less consideration of other fish species. This was repeatedly referred to in responses. More specifically, one respondent felt that the implications of some of the proposed measures for other marine and freshwater species (including halibut, rainbow trout and trout) have not received sufficient consideration.

4.7.2 Another consultee felt that any species of conservation interest ( e.g. eel, Arctic char, vendace, powan, lamprey, etc) should be appropriately protected and recognised, whilst recognising that this is done largely through the network of conservation site designations at present. However, it was also noted that some widespread species ( i.e. eel) with recognised high conservation value do not have any protected sites and clarification of implementation of the Eel Management Plans was sought.

4.7.3 Some respondents suggested that further proposals relating to other species should be the subject of future consultation, with some feeling that this was overdue.

4.7.4 Additional measures to protect other marine and freshwater species suggested by respondents included discontinuing a proprietor's right to remove these species without the appropriate authority.

4.8.1 A freshwater fisheries respondent felt that the status of trout and sea trout should be clarified, and all trout in the species 'Salmo trutta' should be within the statutory remit of DSFBs.

4.8.2 Another felt that DSFBs should be considered as a statutory consultee for all applications for planning permission that may directly or indirectly impact upon their river systems.

4.9.1 One marine fisheries consultee felt there is a need for further consultation with other interested parties in relation to the operation of MAs ( i.e. Boards, rod fisheries interests, commercial fishermen and tourist boards). They felt that the main areas of this consultation should be on sea-lice infestation of smolts, use of chemicals in areas where there is little water exchange, better control of salmon numbers per cage, and better cage construction.

4.10.1 Some respondents discussed wider issue with close times. One marine fisheries respondent felt that the Scottish Government should consider the abolition of weekly close times in relation to netting and introduce an allocation of 'days at sea for netting'. They felt that this would protect heritable rights and allow opportunities for fishing when there are sufficient and robust stocks.

4.10.2 Two freshwater fisheries and individual respondents stated that weekly close times are not being observed in some parts of Scotland, particularly noting that net fishing leaders are often left in place over close times due to health and safety reasons ( i.e. rough seas making removal too dangerous). They felt that this was effectively a means of extending net fishing into weekly close times, and suggested that netsmen should be required to report all such occurrences to the DSFB when these leaders are not removed. They felt that the leaders should be removed for a corresponding period at the earliest opportunity during a valid fishing period, as compensation for fishing during a close time period. However, a marine fisheries respondent suggested abolition of weekly close times altogether to avoid netting interests taking unnecessary health and safety risks in the removal of leaders.

4.10.3 A marine fisheries respondent felt that the requirement that they remove netting gear from the fishing station at the end of the season should be revised, stating that as netting interests often reside there, they store their gear at the station. They felt that revision of the current provision (to remove gear from the sea within 36 hours at the end of the season) should take account of health and safety concerns, and suggested adding 'where practicable having due regard for health and safety of the personnel involved' into the provision.

4.10.4 This respondent also suggested the introduction of legislation for an 80-metre exclusion zone around fixed engines within the sea, citing health and safety concerns associated with gear becoming tangled in vessel propellers.

4.11.1 A voluntary sector consultee stated that there is a large but undefined number of inactive netting stations in Scotland, and that netting rights still exist for these. They noted that the 1997 Report by the Scottish Salmon Strategy Task Force stated that it would be inappropriate to prohibit the operation of active net fisheries, but that there should not be any increase in fishing effort.

4.11.2 Several freshwater fisheries and individual consultees felt that a DSFB or local angling club should have a statutory pre-emptive right to purchase or lease a netting station if it is put up for sale or lease to a third party. They felt that this would prevent increases in fishing efforts, and contribute to meeting international obligations.

4.11.3 Several freshwater fisheries and one voluntary sector respondent noted an imbalance in financial burdens between net and other fisheries, stating that net fisheries account for over 45% of the retained catch yet contribute just 1.3% of total funding raised for fishery management by DSFBs. They added that this should be addressed in future legislation.

4.11.4 A freshwater fisheries respondent felt that netsmen should report all non-salmonid species they catch in their nets.

4.12.1 One freshwater fisheries respondent felt that 'catch and release' of salmon should be statutory in all Scottish rivers for salmon, and particularly in the spring. They added that they felt that restrictions on rod fishing in the River Helmsdale are 'suffocating the local economy'.

4.12.2 One freshwater fisheries respondent felt that consideration should be given to changing the annual season to reflect the changing climate.

4.13.1 There was concern that the proposals in the Consultation Document would adversely impact the coarse angling industry. One respondent felt that the provisions in Section 4 of the document would stop the stocking of coarse fish, and give fishermen the right to kill coarse fish if caught, effectively ending coarse fishing in Scotland.

4.13.2 A voluntary sector respondent felt that coarse fish should be considered in this consultation, particularly the introduction of open and closed seasons for coarse fish to reduce pressure on spawning fish stocks. They added that there are currently measures in place in England to protect coarse fish stocks.

4.13.3 A freshwater fisheries respondent suggested a series of legislative changes on the use of nets and traps, introduction of catch and release, regard for fish populations during drainage or engineering work, and less restrictive provisions relating to controls over predators for the protection of coarse fish stocks.

4.14.1 Several respondents raised the issue of POs in their responses. One individual respondent in particular recommended a series of changes to the legislation, including widening the basis for applications for POs, changing the emphasis of evidence to reflect balance between access and conservation/ protection, and the introduction of Ministerial powers to introduce a PO in circumstances where it can be demonstrated that native species or their environment are at risk.

4.14.2 They also felt that present legislation does not encourage local involvement and decision-making in the management of the fisheries, and suggested changes to the operation of Management Committees and Liaison Committees.

4.15.1 The following gaps in the consultation were identified by a range of respondents:

4.16.2 A freshwater fisheries respondent felt that 'it would be a disaster for Scottish salmon fisheries if Mixed Stock Fishery ( MSF) high sea fisheries were to resume'.

4.16.3 Another expressed disagreement with SEPA guidance concerning the requirement for a 'walk-by' survey of any water course less than a metre in width.

4.16.4 A voluntary sector respondent felt that the CoGP for Scottish Aquaculture should be reviewed, and suggested this be undertaken with a multi-stakeholder perspective. They added that they felt the Aquaculture and Fisheries (Scotland) Act 2007 contains provision for the adoption of the CoGP as a legal requirement.

4.16.5 A local authority discussed the issue of permanent planning permissions in their response. They stated that the Town and Country Planning (Marine Fish Farms Development) Order 2011 granted permanent planning permission to a large number of sites in their district. However, they have not yet received information on which sites, equipment and planning boundaries have been approved, and have not been able to include them on the planning register or take enforcement action.

4.16.6 A local authority questioned who will be responsible for consenting waste and chemical discharges of farms located beyond three nautical miles off-shore, and suggested that this should be discussed by the Working Group for the Ministerial Group on Aquaculture.

4.16.7 An individual respondent suggested that the Scottish Government look into a perceived opportunity for the proposed Aquaculture Regional Advisory Council to be set up in Scotland.