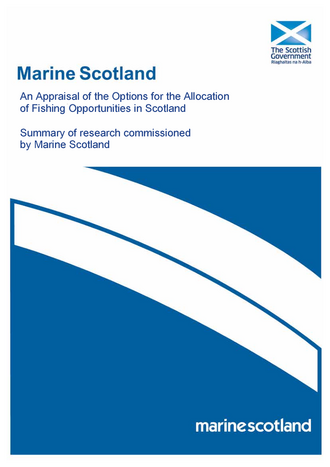 A2.1. We undertook an extensive consultation programme with interested parties. That comprised face-to-face discussions with most of the key bodies in the fishing industry in Scotland and a questionnaire survey.

A2.2. In our tender for the study we proposed a series of public meetings. However, after discussions with interested parties it was decided not to hold those and the resources were switched instead to more face-to-face discussions. The main reason for that decision was the widespread opinion that most fishermen and other people in the industry would not be willing to give their real views in public meetings and that they would prefer confidential discussions.

A2.3. The consultations can be divided into six categories or groups:

A2.4. About 50 face-to face discussions were held with people from the above groups, plus about 20 telephone interviews.

A2.5. In addition a questionnaire was prepared, which is included as an appendix to this section.

A2.6. 82 completed questionnaires had been returned by the time this report was written. The questionnaires were circulated to a list of contacts compiled with the help of Marine Scotland. In addition, an advertisement was put in the Fishing News inviting people to obtain and complete the questionnaire or submit their views separately.

A2.7. Most of the people interviewed and most of the questionnaires supported the present system - the status quo - and wanted no significant changes. Various minor changes were suggested, as detailed below. The main concerns related to the roles of "slipper skippers" and other non-active participants, as also explained below.

A2.8. The main exceptions to the above generalisations came from people involved in the inshore fisheries, which are not currently included in the quota system. Their opinions are also explained in more detail below.

A2.9. Discussions were held with representatives of the:

A2.10. plus the regional associations in:

A2.11. Most of the quotas are managed by the producer organisations ( POs), of which there are 11 in Scotland:

A2.12. We had detailed face-to-face discussions with the chief executives of most of the above organisations.

A2.13. We also had face-to-face discussions with individual fishermen, both active and retired, most of whom were previously known to the study team. A few others were met at a fisheries exhibition in Aberdeen.

A2.14. Discussions were also held with a number of fishing-related businesses, such as Denholm, Don Fishing, LHD, P&J Johnstone and Shetland Catch.

A2.15. Discussions were also held with other bodies and questionnaires were received from others. They included local authorities such as Aberdeenshire, Highland and Shetland Islands Councils.

A2.16. Finally, about 15 questionnaires were received from people who do not fall into the above categories.

A2.17. Note: the following is a brief summary. We can give summaries of the responses from the POs and other bodies if that would be helpful.

A2.19. 82 completed questionnaires had been received at the time of writing. It is not possible to say that they are representative, however.

A2.21. In addition, an advert was placed in the Fishing News, inviting interested people to obtain electronic or hard copies of the questionnaire from our offices to complete them. It is not possible to say how many of the returned questionnaires were in response to the Fishing News advert but it was probably in the 30-35 range.

A2.22. The completed questionnaires cannot therefore be regarded as representative, unlike the face-to-face meetings. However, they have been very interesting to analyse.

A2.23. As mentioned above, the strong conclusion from the consultations is that most people in the Scottish fishing industry want the present quota system - Fixed Quota Allocations ( FQA) - to continue, but possibly with minor modifications. There was a little support for changing to an Individual Transferable Quota ( ITQ) system. However, no one was in favour of scrapping the FQA/ ITQ system and reverting to the pre-1999 arrangements.

A2.24. A few people stressed that the current total allowable catches ( TACs) are about 40% of what they were in 1999. That is the main reason for the contraction in the Scottish fishing fleet.

A2.25. Many people highlighted that there had been considerable instability in the industry since 1999 but that the quota system had provided some stability. They want that relative stability to continue. References were made to the new problems created by the Cod Recovery Plan and the EC's discard ban proposals.

A2.26. The main criticisms of the current FQA system were:

A2.27. However, there was not unanimity on the above points. In particular, most of the POs and many individual fishermen are strongly opposed to changes in favour of 10mu vessels, such as "top slicing", which would adversely affect their own quotas. That should not be surprising.

A2.28. The general opinion of the POs and individual fishermen is that they have invested in the quotas - some over a long period of time - and that any top slicing or other reallocation of those quotas to the inshore/10mu fleets would reduce the value of those investments. The industry is not very profitable at the present time and any such reallocation would worsen that situation.

A2.29. It was stated that there is a perception that the intention is to discriminate against successful parts of the industry in favour of parts that have not done well in the past.

A2.30. Many people commented that they believe that Marine Scotland want to encourage more landings and activity in the smaller ports. However, the general opinion from the consultations was that that was unrealistic. Many people referred to the substantial investments made in ports such as Peterhead, Fraserburgh, Lerwick and Scrabster, and said that similar investments could not be made in most of the smaller ports such as those on the West Coast.

A2.31. Some people also commented that allocating more pelagic and white fish quotas to the 10mu fleet would not work because most of the skippers involved would not know what to do with them, given that they now mainly fish for shellfish.

A2.32. A few people commented that Shetland has relatively large nephrops quotas but little catching capacity for that species. Consequently most of those quotas are swapped.

A2.33. There was considerable criticism of the so called "slipper skippers" and "speculators", who it is claimed have forced up quota prices.

A2.34. However, one person interviewed said that this problem was grossly exaggerated because the slipper skippers only accounted for about 1% of the total quotas.

A2.35. There were criticisms of the roles of companies such as P&J Johnstone and Denholm. However, those companies strongly defended their roles in the industry.

A2.36. There were also criticisms of the on-board camera schemes which give additional quotas to the boats participating.

A2.37. A few of the POs mentioned that the present system could be improved if there was more international trade in quotas. Examples were given of very small UK hake and coley quotas, whereas quotas for those species in other countries are often under fished. It was stated that such international trade is very difficult.

An Appraisal of the Options for the Allocation of Fishing Opportunities

The Scottish Government has been given new powers to manage fish quotas in Scotland. The objective of the study is to assess whether or not the existing system of allocating quotas could be changed to the benefit of the fishing industry and Scotland as a whole. We are seeking the views of interested parties on these issues.

We would be grateful if you could complete this questionnaire and return it via email or by mail to one of the addresses noted above. Thank you.

Thank you for your cooperation.