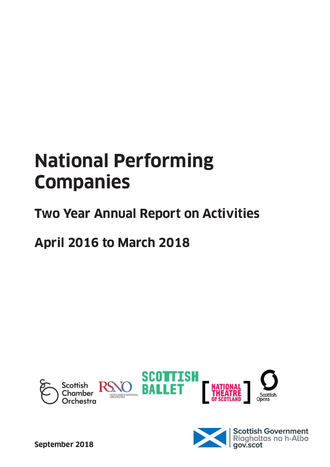 I am very pleased to be introducing this new two-year report for the National Performing Companies covering April 2016 to March 2018.

This report sets out the activity and funding of the National Performing Companies during the tenth and eleventh years of direct funding from the Scottish Government. In publishing the report we are recognising the on-going valuable contribution made by the National Performing Companies to our national cultural life and their ambassadorial role showcasing examples of our talent to the world. This report also fulfils the Scottish Government’s commitment to being open and transparent in our direct funding relationship with the Companies.

The Companies’ reach has extended far in these two years with over 7,000 performances and education events in Scotland, the UK and world-wide, experienced by over one million people. Nationally, all five remain committed to reaching all of our communities and have created performances, events and experiences in every local authority in Scotland.

I have made clear my recognition of the value of the arts, reinforced by maintaining our annual revenue funding to the National Performing Companies at £22.5 million.

The Companies make a substantial contribution to Scotland’s international reputation and I am delighted that the International Touring Fund enabled major tours and international visits to be supported across Europe, Canada, the USA and the Far East, reaching an audience of over 100,000.

The Scottish Government also continued to invest in Scotland’s culture and heritage infrastructure, providing capital funding of £2 million towards the National Theatre of Scotland’s new centre Rockvilla, which opened in January 2017 . Rockvilla is a centre where work can be devised, developed and rehearsed, alongside the supporting functions of costume-making and technical theatre, creating a major new resource for the whole of the Scottish theatre industry.

Alongside this development, the Scottish Government also committed £10 million to establish a new city-centre home for the Scottish Chamber Orchestra through the Edinburgh and South East Scotland City Region Deal. This IMPACT centre will also provide a vital new space for the Edinburgh International Festival, a rehearsal and performance space for creative programming and community outreach, and be an inspiring venue for future generations of performers and audiences.

A wealth of new talent has continued to keep our Companies’ leadership strong and energised. Roy McEwan announced his retirement from the Scottish Chamber Orchestra in Summer 2016 after 23 years as Chief Executive, with Gavin Reid, former Director of the BBC Scottish Symphony Orchestra, confirmed as the new Chief Executive in April 2016. Jackie Wylie was appointed the new Artistic Director of the National Theatre of Scotland in October 2017, following on from her predecessors Laurie Sansom and Vicky Featherstone.

We can be proud that the National Performing Companies continue to attract such strong, valued teams, alongside the exceptional talent of the musicians, performers, dancers, choreographers, composers and writers who bring the joy and benefits of culture to millions, and place the National Performing Companies at the heart of cultural life in Scotland.