2.1 This report aims to give an annual statistical and analytical summary of the operational success of the Companies. However, the artistic achievement of these organisations remains paramount. The National Performing Companies place education and participation at the heart of their core activity and share a belief that access and participation in the performing arts greatly improves the health and well-being of individuals. As such, an overview of these programmes has been included below. Further detail is available on the Companies' websites and in their own annual reports, which are a rich resource for information on programming histories, awards, news and successes.

The National Theatre of Scotland 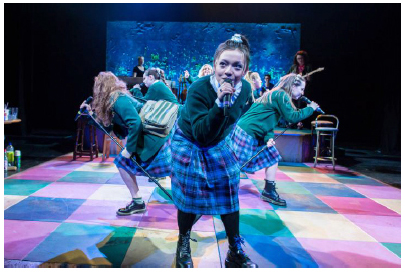 2.2 The National Theatre of Scotland ( NTS) began their tenth anniversary year in 2016, which proved both nationally and internationally successful artistically and financially.

2.3 The 2015/16 programme included Kai Fischer's Last Dream (On Earth), Cora Bissett's Rites, Laurie Sansom's production of Muriel Spark's The Driver's Seat, and saw the premiere of Our Ladies of Perpetual Succour performed as part of the 2015 Edinburgh Fringe Festival, alongside Dragon performed in the Edinburgh International Festival programme. Large-scale main-stage work included Douglas Maxwell's comedy production Yer Granny; a restaging of The James Plays; and a full stage production in Gaelic of Whisky Galore. Internationally, A Christmas Carol toured to Michigan USA and The Strange Undoing of Prudencia Hart also toured across the USA to Winchester, Seattle, Virginia and Washington. In addition, Macbeth toured Japan for the first time to Tokyo, Aichi, Osaka, Kanagawa and Kitakyusyu.

2.4 The National Theatre of Scotland's Learn department continued to provide a range of activities and performances for audiences of all ages to interact and connect with the Company. In collaboration with Aberdeen City Council, the large-scale participatory project Granite took place over seven months from September 2015. In addition, with the Scottish Book Trust, To Begin was a project which took place across six months with the communities of Wigtown and Forres. Alongside these dedicated community programmes, participatory school work also took place linked to main stage productions such as The James Plays.

2.5 In 2014/15 NTS announced the development of their new creation centre called Rockvilla, with Scottish Government support of £2m, and agreement to provide a further loan of £2m. 2015/16 was a productive year in progressing this project through design stage and early construction processes, with timelines set for opening in October 2016. More than 3,000 people will benefit directly from using this facility each year, including artists, community participants, students and theatre-makers from a variety of disciplines.

2.6 Laurie Sansom was Artistic Director in 2015/16. During the course of 2015/16 one of the founding members of NTS and Executive producer Neil Murray, and Graham McLaren one of the Associate Directors, left to take up new roles jointly running the Abbey Theatre in Dublin. 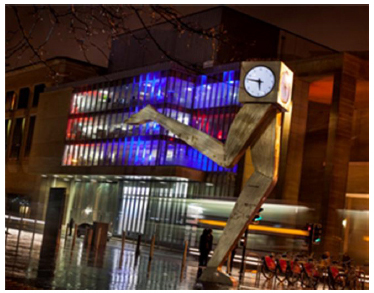 2.7 2015 saw Chief Executive Dr Krishna Thiagarajan joining the RSNO and the appointment of Dame Sue Bruce as Chair. 2015 also marked the start of the Company's 125 th Anniversary celebrations, which were significantly marked by the opening of the new Home, the RSNO Centre, with a gala event in November 2015. The 2015/16 season opened with performances of Mahler's Resurrection Symphony, and included Ravel's orchestration of Mussorgsky's Pictures at an Exhibition and Rachmaninov's Second Piano Concerto.

2.8 Although there was no international touring in this year, the Season focused on three international artists: Brett Dean, Nikolai Lugansky and Boris Giltburg. The RSNO programme also included the Scottish premieres of two joint commissions with Sir James MacMillan and presented the first year of the Composers' Hub project, which resulted in a new work by Lillie Harris called remiscipate. The new RSNO Centre also enabled new programming opportunities to be developed, with two new strands: Under the Skin Of, exploring composers and their works in more detail, and Symphony, Soup and a Sandwich, a new series of lunchtime concerts.

2.9 The collaboration with the 2015 Edinburgh International Festival enabled the Music Director Peter Oundjian to work on a large scale with the Harmonium Project. This was a free outdoor event, attended by 20,000 people, which included dramatic projections across the Usher Hall alongside music by the Orchestra and the Edinburgh Festival Chorus. A new partnership with the Edinburgh International Film Festival was also established, with the first showing of the film Back to the Future accompanied by the soundtrack performed live by the Orchestra. Collaborations continued with the Scottish Chamber Orchestra in Aberdeen, and also included the BBC Scottish Symphony Orchestra in Perth. The Orchestra also performed at the Spree and Celtic Connections festivals.

2.10 The RSNO Chorus also performed in a number of artistic highlights including the closing concert of the 2014/15 season Elgar's Dream of Gerontius and the opening of the 2015/16 season with Mahler's Second Symphony and Vaughan Williams' A Sea Symphony. The RSNO Junior Chorus also continued to grow in strength with 370 children involved, the highlight of their programme being Sir James MacMillan's specially commissioned Little Mass. In addition, the RSNO Chorus Academy and RSNO Glasgow Community Orchestra offered amateurs the opportunity to sing and join in with the Company's activities. The Perth Community Orchestra also continued into its third year, taking part in an extensive schools and communities programme in Dundee. 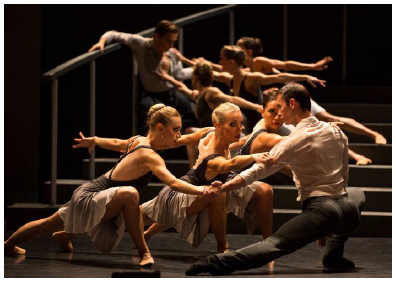 2.11 Scottish Ballet began the financial year 2015/16 performing at the Sadler's Wells, London, before opening the inaugural Dance International Glasgow.
The Company partnered with
the inclusive dance company, Indepen-Dance 4 and collaborated with choreographer Marc Brew to present a new work, Exalt. This was paired with Hans van Manen's 5 Tangos.

2.13 Scottish Ballet also provided an extensive Education and Outreach programme in 2015/16, which is embedded within the Company's core responsibilities and values. This included Scottish Ballet's Youth Exchange (a programme providing participants with artistic, professional and cultural experiences, helping to prepare them for a career in the dance industry), Wee Cinderella (a specially tailored performance for pre-school age children), the Launch primary schools project, the Close programme (for young people excluded from main-stream schooling), the Dancers Education Group, dance classes for participants over 50 years old, and Scottish Ballet's Elders Company. New initiatives included classes for people living with Parkinson's and a professional choreographic mentoring programme Anserinae. Scottish Ballet also presented its first relaxed performance of Cinderella for children and adults with additional needs.

2.14 In parallel to this programme, Scottish Ballet also offered a range of workshops specifically for early years, dance classes for 9 to 21 year olds, and Summer Schools aimed at young dancers with a passion for dance; all tailored to encourage boys' and girls' confidence, creativity and imagination. The Hothouse choreographic development programme for young people also operated successfully on two levels this year in partnership with YDance. The Company extended its adult drop-in Ballet classes for intermediate and advance ballet and created new adult ballet classes for beginners and absolute beginners. The vocational courses continued to prove highly popular with the Associate programme, which provides classical training for children and teenagers wanting to become professional dancers reaching record figures. The BA Modern Ballet and the MMus (Pianist for Dance) courses, created in collaboration with the Royal Conservatoire of Scotland and the only vocational course offered jointly by a conservatoire and a professional ballet company, also continued to be internationally highly sought after opportunities. 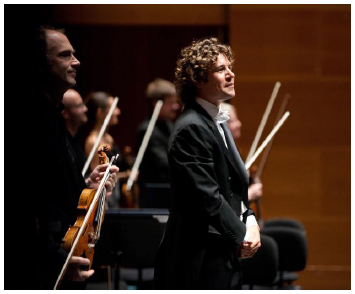 2.15 In the 2015/16 financial year the Orchestra delivered across a range of programmes Scotland-wide. The Winter Season was delivered in the principal venues of Edinburgh, Glasgow, Dumfries, Aberdeen and St Andrews, alongside a Perth-specific series with the RSNO and BBC SSO, and chamber concerts in the Queen's Hall Edinburgh, Royal Conservatoire Scotland, Cottier Chamber Project and Perth Concert Hall. The SCO also toured extensively across the Highlands and South of Scotland, in addition to central Scotland, as part of the Autumn Classics season.

2.16 Although there was no international touring, the SCO appeared at the BBC Proms, St Magnus Festival in Orkney, East Neuk Festival, Lammermuir Festival and the Edinburgh International Festival 2015 programme, including the annual Virgin Money Fireworks Concert. Highlights included the co-commissioned premiere of Rolf Martinsson's song cycle Garden of Devotion, the commission and premiere of Lotta Wennäkoski's Verdigris and a specially commissioned piece for the opening of the new Borders Railway. New discs were also released of the Haydn Symphonies with Principal Conductor Robin Ticciati, as well as Mendelssohn and Schumann Piano Concertos.

2.17 The education team SCO Connect continued their successful Masterworks programme for secondary schools, Big Ears, Little Ears for babies and toddlers and SCO VIBE, a fusion orchestra for 11-18 year olds. Alongside this programme, the orchestra delivered a student composition project with Lotta Wennäkoski and work continued on SCO ReConnect, the Company's project for people living with dementia. 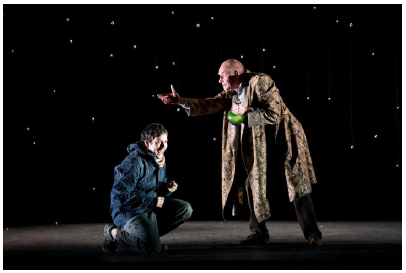 2.18 Having completed a major capital project with the opening of the new Theatre Royal foyers in December 2014, which have since received a number of architectural nominations and awards in Scotland and the UK, Scottish Opera announced the appointment of Stuart Stratford as its new Music Director in April 2015. Over the course of this financial year, Scottish Opera presented six operas in Scotland, including a world premiere co-production that also toured across the UK and internationally.

2.19 Five of these were mainstage operas including Janáček's Jenůfa, Verdi's Il trovatore, Bizet's Carmen and Handel's Ariodante. The Devil Inside, based on Robert Louis Stevenson's short story The Bottle Imp, with music by Stuart MacRae and libretto by author Louise Welsh, premiered at the Theatre Royal Glasgow and was then performed in the King's Theatre Edinburgh. The production thereafter toured onwards in eight venues across England and Wales and, in collaboration with Tapestry Opera, attracted critical acclaim as Scottish Opera's North American debut in Toronto. Scottish Opera also presented a national tour of Così fan tutte across 19 venues during Autumn 2015, with Opera Highlights touring a further 18 smaller and more remote venues in Spring 2016.

2.20 The Orchestra of Scottish Opera presented two of The Sunday Series of concerts within this financial year, alongside a concert of Gilbert and Sullivan's HMS Pinafore as part of the 2015 Edinburgh International Festival. The CONNECT company, Scottish Opera's youth company, presented a double bill of operas in Webster's Theatre Glasgow, Stephen Deazley's Dr Ferret's Bad Medicine Roadshow and Jonathan Dove's The Walk from the Garden. The CONNECT company also worked with conductor Sian Edwards and The Orchestra of Scottish Opera in a programme featuring excerpts from Tchaikovsky's Eugene Onegin.

2.21 The education team created and presented 59 performances Scotland-wide, with The Pop Up Opera trailer tour of A little Bit of Carmen, A little Bit of Barber and a children's piece about Scotland's canals. KidO, their ever-popular show for 3 and 4 year olds, also toured nationally. The Little White Town of Never Weary was created for the Festival of Architecture 2016 in collaboration with 6 local Kirkcudbright primary schools and Warriers! The Emperor's Incredible Army was presented at Aberdeen's Beach Ballroom in collaboration with 11 primary schools from the area.

2.22 The team also worked with 112 primary schools across Scotland, presenting the 2007 revival of Fever! As well as these school-specific initiatives, the programme for those living with dementia, Memory Spinners, continued into its 5 th season, hosting 143 people in 2015/16. Alongside Scottish Opera's tour to Toronto described above, the education team also visited Hong Kong and Singapore with a specially adapted version of The Magic Flute, delivered to 400 young people from local primary schools.

3. Facts and Figures for the Financial Year April 2015 to March 2016
1. Cabinet Secretary's Introduction