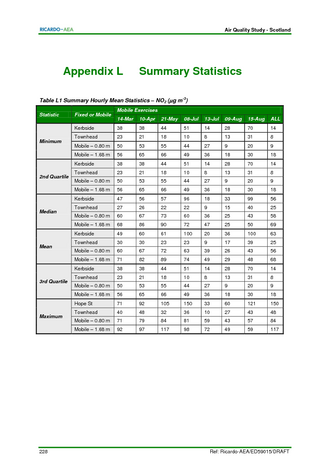 The Scottish Government commissioned a study to undertake a mobile air quality monitoring study. The two key aims of the study were:

The study primarily focussed on particulate matter with mean aerodynamic diameters of 2.5 m (PM 2.5) and 10 m (PM 10), ultrafine particles ( UFP) between the sizes of 10 nm and 300 nm and black carbon ( BC). In addition, the following pollutants were monitored:

Contour plots of pollutant concentrations throughout the mobile monitoring route were produced in order to help analyse the spatial distribution of pollutants and assess the influences of local factors, such as traffic density.

The findings of the Glasgow study demonstrated the complexity of ambient air quality within the urban environment and the challenges of monitoring a range of important pollutants within such an environment. Within a limited duration exercise, the study provided valuable insights into not only spatial variations of key air pollutants in Glasgow City centre but also the influence of exposure height on the concentrations observed. In addition, the study also helped to elucidate correlations between observed concentrations of different pollutants at different exposure heights and also provide useful information regarding the application of mobile monitoring and the application of personal sampler/ sensor technology for assessing human exposure to air pollutants in an urban environment.

In brief summary, the study identified that spatial and temporal variations in pollutant concentrations in Glasgow City centre are generally species specific and can also be influenced by a wide range of other environmental parameters, such as the proximity to pollution sources. Whilst a large number of initial conclusions have been drawn, several of the findings are considered to merit further attention. These were:

Overall, the study provided valuable insights into spatial (vertical and horizontal) variations of concentrations of key air pollutants in Glasgow City centre. The study has generated numerous interesting findings which with further research could help to inform and guide future air quality research and policy in Scotland.