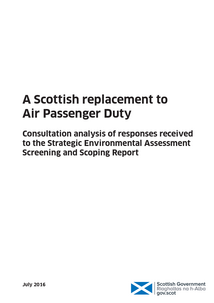 This section provides an overview of how the consultation was undertaken and the method of analysis used to consider the responses received.

How was the consultation undertaken?

6. Both consultations (the policy consultation and the SEA Screening and Scoping Report) were made available for comment on the Scottish Government's Citizen Space [4] and Dialogue [5] platforms, and by email and post. The consultation period lasted 12 weeks, commencing on 14 March 2016 and concluding on 3 June 2016.

How has the analysis work been undertaken?

7. The analysis of consultation responses to the SEA Screening and Scoping Report has been undertaken by the Scottish Government's Environmental Assessment Team. All responses received on the Citizen Space and Dialogue platforms, as well as by email and post, have been analysed and summarised. Where applicable, responses received have been summarised under the relevant questions to which the text relates. In instances where it has not been possible to attribute comments and views to specific questions, these have been incorporated within the " Overview of comments" section.

8. An independent analysis was undertaken of the responses received to the policy consultation, and can be found at: https://consult.scotland.gov.uk/fiscal-responsibility/air-passenger-duty. This analysis identified a number of views raised regarding the environmental implications of the Scottish Government's proposals to reduce the Scottish APD replacement tax by 50% by the end of the current session of the Scottish Parliament, and to abolish the tax entirely when resources allow. To ensure continuity across both analysis reports, these views have also been summarised in the " Overview of comments" section.

9. A broad overview of the number of respondents to specific questions in the SEA Screening and Scoping Report has been included where applicable.

10. Where respondents have made similar points the following terms have been used:

11. Statistical analysis of responses to the SEA Screening and Scoping Report has not been explicitly used for the purposes of this analysis as it was felt that this was not effective at capturing the number of broader environmental views submitted via responses to the consultation document.