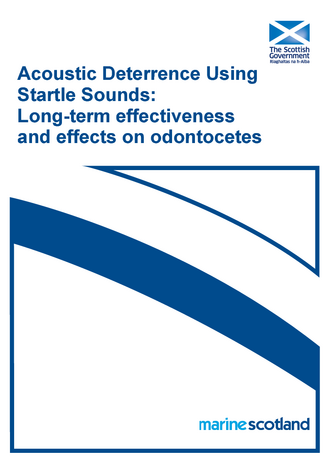 Pinniped predation on fish farms is a worldwide problem and can result in significant losses to the industry. A wide range of seal control measures are employed at fish farms to minimise the impact of seal predation, including Acoustic Deterrent Devices ( ADD) often referred to as seal scarers. Commercially available ADDs can cause stress, hearing damage and deter non-target species such as dolphins and porpoises from their natural habitat. A previous Scottish Government funded study using very short noise bursts to startle seals has shown that alternative methods may be available to deter seals. In this project, a startle ADD prototype was tested for 13 months at a salmon farm. We also tested this method for short periods of time at two other farms with acute seal predation problems caused by seals. During the 13 months test phase at the salmon farm only five minor predation events were noted. Predation was significantly higher at the same farm before ADD deployment and also at two adjacent control farms that did not use ADDs. Seals, porpoises and otters still approached the farm during the 13 months, but no additional predation was observed. Short term tests at two fish farms with high predation, reduced predation to zero within one day of ADD deployment. The study showed that the startle ADD is successful at preventing seal predation over 13 months and does not affect the distribution of harbour porpoises in the area. In other applications such as marine pile driving, cetaceans may need to be deterred for short periods of time to protect them from noise impacts. We therefore also tested whether bottlenose dolphins startle and what their startle threshold would be. This will allow the design of startle sounds for toothed whales. We found the threshold to be at approximately 80 dB above the hearing threshold. This value is very similar to the ones found in other mammals. We recommend the use of the startle method more widely since it is an effective method to prevent seal predation at fish farms, can be tuned to affect only certain species in an environment and has significantly less impact on wildlife than other tested devices.