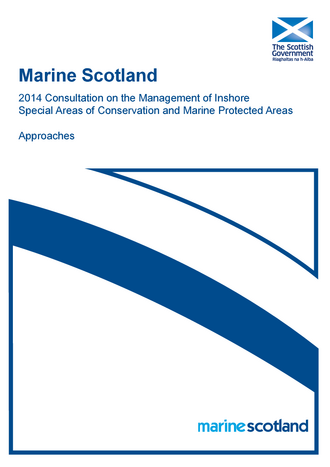 Measures for Sanday would be delivered by Statutory Instrument using powers under the Inshore Fishing (Scotland) Act 1984.

The table below lists only those features that are seabed habitats.

Mobile/active fishing gear may be used over stony reef where this is interspersed with areas of target ground types. This can result in the damage or death of fragile, erect species, such as sponges and corals, and changes to the structure of the habitat and the long term survival of its associated species. In addition to direct impacts, bedrock reef and stony reef are sensitive to smothering from increased levels of sedimentation which can be caused by passing mobile/active fishing gear which causes smothering of fauna and flora on the rock surface.

Static gear over bedrock and stony reef can also cause surface abrasion when being deployed or recovered, and this has the potential to cause mortality of the fragile epifauna on the reef habitat. However, the extent of these impacts on reef environments is variable, and will be dependent on intensity of fishing and the recovery rates of the species involved.

There is 1 approach proposed which would prohibit the use of certain fishing gears throughout the SAC.

Demersal trawl, mechanical dredging and suction dredging (boat and diver operated) would be prohibited all year round as shown in figure J2.

By removing or avoiding the pressures being exerted on the habitats, within the SAC, the measures will ensure that these activities will not prevent the achievement of the conservation objectives. It would also mean that future changes to fisheries policy and management are unlikely to require an appropriate assessment.

In the 4 year data set (2010 - 2013) there is only one scallop dredge VMS report and none for trawls. According to Scotmap data there may be up to 3 vessels active. If all of the value of overlapping cells is derived with the SAC boundary then this would be worth approximately £12,000 per year.

Sanday covers part of ICES rectangle 47E7. According to the analysis of Scotmap data of trawl and dredge fisheries approximately 5.5% of the total value of that ICES Rectangle is taken from the MPA. For 2013 this equates to approximately 2.5 effort days and £2,700.

The amount of annual activity is so low that displacement of it is unlikely to have any negative effect on the environment.