Part 6 of the Marine (Scotland) Act 2010 seeks to balance seal conservation with other pressures and requirements, such as species conservation. On 1 February 2021 changes to Part 6 came into force which removed two reasons for which licences to kill or take seals could be granted. These are protecting the health and welfare of farmed fish and preventing serious damage to fisheries and fish farms:

The documents in the sub-collections below comprise information, guidance and forms relating to these areas. 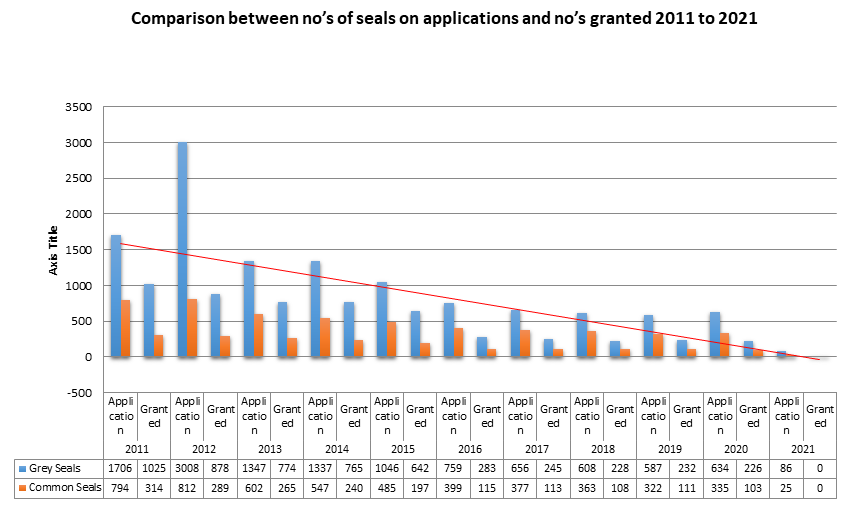 About seal licensing and the seal management system

Applying for a licence

All persons that wish to manage seal predation in order to conserve seal, or other wild animals (including wild birds) or wild plants must apply for an annual seal licence using the form below. Applicants should read the accompanying guidance notes.

Applicants must be aware of Scotland's seal management areas.

Applications can be made between 21 January and 18 February  for the following licence period, which runs from May to April.

Persons that wish to apply for a licence to kill or take seals for any other licensable purpose should contact MS-LOT.

Yearly records of the numbers of seal license applications processed since the introduction of the scheme.

Return forms for members of the public involved in the Scottish Government's seal management scheme.

Reviews of the seal licensing system

Under Section 129 of the Marine (Scotland) Act 2010 a report on a review of the operation of the seal licensing system was required within 5 years of Section 110 of the Act coming into force on 1 September 2010.

In 2015 a report was published that considered all aspects of the seal licensing system during the period from 2011-14.

The Marine (Scotland) Act 2010 imposes a duty on licence holders to report the number of seals taken under licence on a quarterly basis.  All seals killed to alleviate suffering must be reported as soon as reasonably practical. To do so please complete the appropriate forms and return them to: