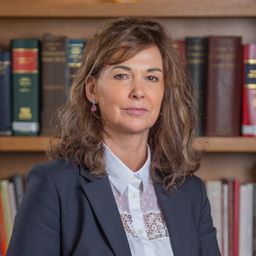 All prosecutions on indictment run in the name of the Lord Advocate.

Read more information about the role and functions of the Lord Advocate.

Dorothy has extensive experience in both civil and criminal law. She qualified at the University of Aberdeen and began her career as an Advocate in 1994, taking silk in 2007. She has been instructed in cases at all levels, including the Court of Session (Inner and Outer House), Court of Criminal Appeal, High Court of Justiciary, United Kingdom Supreme Court and the European Court of Human Rights.

As Principal Advocate Depute, Dorothy was Scotland’s most senior prosecutor, conducting many complex and high profile criminal prosecutions and appeals. In 2008, Dorothy reported on the prosecution of sexual crime in Scotland, which in turn resulted in the creation of the National Sex Crimes Unit.