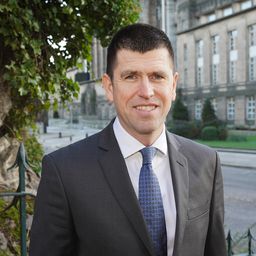 John-Paul Marks was appointed as Permanent Secretary to the Scottish Government on 1 January 2022.

As the most senior civil servant in Scotland and head of the civil service supporting the Scottish Government, the Permanent Secretary is the principal policy adviser to the First Minister and Secretary to the Scottish Cabinet.

Leading more than 7,000 civil servants who work for the Scottish Government in Scotland, London and around the world, JP supports the development, implementation and communication of government policies. This work is undertaken in accordance with the Civil Service Code, upholding its four core values of integrity, honesty, objectivity and impartiality.

He is committed to the delivery of the National Performance Framework – Scotland’s outcome-based approach to the implementation of policies aimed at improving the wellbeing and life chances of its citizens, supported by a successful, inclusive economy and a sustainable and healthy environment.

JP works with colleagues across the UK supporting, engaging and investing in the talent and leadership of the UK Civil Service and wider public services.

Married with two children, JP was born in the Channel Islands and lives in Scotland. JP is committed to building a world-class, values-led civil service which excels in serving the public.