Social Security is a human right and the Scottish Government is committed to ensuring that people in Scotland take up all of the support that they are entitled to.

Over the course of 2017, the Scottish Government delivered a programme of activity to increase uptake of social security, by encouraging people to exercise their rights and claim the benefits that are their due.

Central to this was a national marketing campaign that ran in October 2017. The campaign was aimed specifically at those aged 65+ and encouraged them to find out if they are eligible for benefits they’re not currently receiving, and if so, apply for them.

The campaign was carried out in partnership with Citizens Advice Scotland ( CAS), with a campaign helpline set-up for this purpose. People were encouraged to call or visit their local bureau to find out what they may be entitled to and to get help applying.

Advertising appeared on television, national press and bus interiors. It was also supported through media relations and via partnerships with key stakeholders.

The overall campaign budget was £280,000. This includes all strategic and creative development, media buying and PR.

A range of objectives and key performance indicators were set for the campaign, including:

Testing with the target audience identified the creative route that was most successful in terms of delivering on the campaign objectives. The creative testing focus groups were attended by those recruited from across the target audience, with specific measures to ensure those with disabilities were represented (see below)

The key messages for the campaign included:

Our four core executions were developed and used in national press and on bus panels. It was important to portray those aged 65+ as active, valued members of society with a lot to give to their communities.

A 30-second TV commercial was developed ‘telling the story’ of the 65+ protagonists and allowing the audience to ‘recognise themselves’ and feel encouraged to act and claim what is rightfully theirs. This is available to view on YouTube here.

Details of the campaign media plan are provided below.

Coverage was generated across key national titles including Daily Record, The Scotsman, The National and BBC Good Morning Scotland, with strong regional coverage both in print and online. 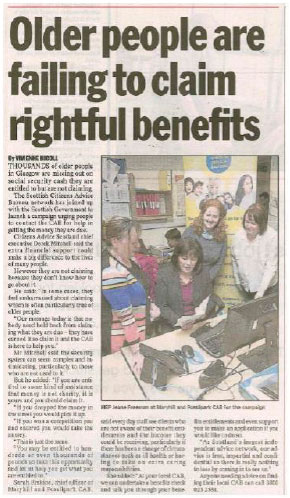 Our evaluation process was built around two principal elements:

The survey was carried out by an indepentent research agency, Kantar TNS, who used a face-to-face in-home omnibus (Scottish Opinion Survey) as the vehicle for data collection.

This is a representative sample of around 1000 adults who are interviewed each month. Questions related to the campaign were only asked among the target audience of those aged 65+.

Robust data on the increase in the take-up of benefits due to the campaign is difficult due to the often considerable time lag in the materialisation of the gain in many cases, especially in cases where Attendance Allowance is involved. A bureaux will not record a gain until they are sure the client has been awarded a benefit.

There will also have been other activity taking place which would have an impact, including the delivery of the Financial Health Checks pilot, funded by the Scottish Government.

CAS has said that it is clear that there has been considerable gain in terms of maximising income for those clients who have applied for new benefits since the campaign launched.

We would expect there to be a higher overall gain with those who will have received financial support that we do not know about, and also expect it to increase further as claims applied for are decided.

If a similar campaign is used in future, the following recommendations should be considered:

2. Starting to affect a change in attitudes, using specific language to shift perceptions away from the negative connotations often associated with claiming benefits (“scroungers” or “spongers”) to it being about entitlement and fairness.

In regards to the first point, the campaign has worked well, especially in terms of the central call-to-action of contacting CAS, with the number of phone calls over delivering by 17% and website visits increased by 27%. This has led to an increase of uptake of benefits of over £152,000.

We have also seen positive steps forward in relation to changing attitudes, with our key messages well understood and progress in levels believing that they are entitled to more benefits.

However we know that changing perceptions is not something that happens overnight, especially when we were are operating within the challenging context of a gradual move towards increasingly negative media coverage in relation to social security provision.

It is therefore vital that we continue to communicate the core message of entitlement to help meet our long-term objectives of increasing benefit uptake and income maximisation amongst those in Scotland.

The new Social Security agency gives us a great opportunity to try and shift the tone and language in this area to align with the core principles of dignity, fairness and respect.