Where to plant trees to protect rivers under climate change

River temperature (Tw) influences the feeding, growth, productivity and survival of freshwater fish. For juvenile Atlantic salmon, 16°C is optimal for growth, while temperatures greater than 23 °C
cause thermal stress and greater than 32°C can kill fish in a few minutes. In 2018 around 69% of Scottish rivers experienced temperatures that would cause thermal stress, conditions likely to occur every other year by 2050.

Bankside trees can reduce Tw. However, the size of their effect varies depending on river characteristics (e.g. width, orientation, aspect, speed, depth) and the topography of the surrounding landscape, which can also shade the river.

Fisheries and river managers are planting bankside trees to protect rivers from high water temperatures. However, the information necessary to prioritise where planting would deliver the greatest benefits has not been available until recently.

Marine Scotland and the University of Birmingham have developed GIS maps and advice for river managers to identify where tree planting can have the greatest benefits for Tw and temperature sensitive salmonid species.

The maps have been developed from two types of complimentary river temperature models developed under the Scotland River Temperature Monitoring Network (SRTMN): 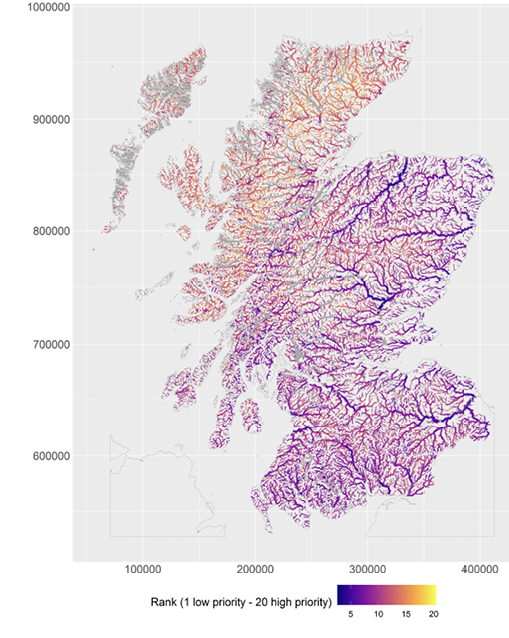 Process based models represent the energy exchange processes that control Tw. The primary controls on maximum Tw during the summer are shortwave solar radiation (sunlight) and discharge (water volume and velocity). By modelling the shading effects of trees on Tw for rivers with different characteristics it is possible to score them accordingly. The resulting score is termed a planting prioritisation metric and can be mapped across Scotland’s rivers. See Jackson et al 2021.

Riparian tree planting can have greatest benefits for Tw and freshwater fish where temperatures are hot, likely to increase rapidly under climate change and where tree planting can substantially reduce maximum Tw through shading.

By combining information from the SRTMN statistical and process based models it was possible to develop riparian woodland prioritisation scores on a scale of 1-20, where 1 is low priority (low Tw, weak sensitivity to climate and trees provide a small reduction in temperature) and 20 is high priority (high Tw, strong sensitivity to climate and trees can provide a large reduction in Tw). To support decision making at different spatial scales scores can be scaled nationally or regionally. Because tree planting has a variable effect on Tw depending on which bank is planted (southerly, northerly, both), three layers have been produced for both national and regional prioritisation, generating a total of six management layers (GIS maps) which are available on NMPi.