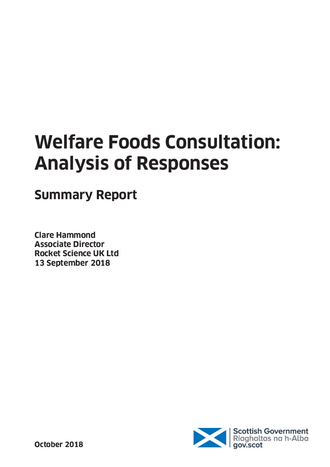 'Welfare Foods - a consultation on meeting the needs of children and families in Scotland' was published in April 2018 and invited views on the Scottish Government's approach to Welfare Foods following its devolution through the Scotland Act 2016. UK Welfare Foods currently includes: Healthy Start Vouchers, Healthy Start Vitamins, and the Nursery Milk Scheme. The Scottish Government proposes to replace Healthy Start Vouchers with Best Start Foods, administered through a smartcard system. It also proposes to offer free milk to all children in funded and non-funded Early Learning and Childcare ( ELC) provision from 2020.

The consultation consisted of 11 open-ended questions. 147 respondents completed the consultation, including 75 individuals and 72 organisations. A majority of individual responses (58%) were uncategorised, but there were also individual responses from: medical or healthcare professionals (21%); parents or carers (5%); and childminders (4%). Organisational responses included responses from: third sector or community organisations (28%); NHS Boards (22%); Local Authorities (18%); Representative bodies for professionals (6%); and retailers including retailers' representative bodies (4%). [1]

The most common types of organisations that responded

These responses have been analysed thematically and qualitatively, although agreement or disagreement in response to questions 7 – 11 has also been quantified.

Responses to the open-ended questions were analysed thematically and qualitatively, but the frequency of themes was recorded to gain a sense of their prevalence across respondents. Whilst not exact, broad frequencies are indicated throughout the text using the following key:

Questions 7 to 11 did lend themselves to more precise quantification, given that they invited respondents to explicitly express agreement or disagreement. Views on these questions are therefore provided quantitatively as well.

A large majority of respondents suggested a national awareness raising campaign through a range of media, to raise the uptake of Best Start Foods. Suggested media included mainstream media, social media, visual marketing materials, information packs and the use of celebrities or chefs in the campaign. Some participants specifically mentioned the need for this promotion to be done in a partnership between local authorities, the Department for Work and Pensions, the NHS, the Scottish Social Security Agency and the Third Sector. Consistent branding in multiple languages with an emphasis on positive messaging to improve the stigma associated with food vouchers. A large majority of respondents also saw a need to increase awareness of Best Start Foods amongst low income pregnant women and families, as well as the agencies and professionals that work with them regularly.

The role of frontline staff was seen as key for raising awareness and uptake of Best Start Foods – in particular healthcare professionals; early years providers and schools; local authority and third sector welfare rights advisers; and staff working in social care and community roles. Healthcare staff, health visitors and midwives in particular were identified by most respondents. It was felt that training and awareness-raising for frontline staff would cascade down to families and parents.

Some respondents suggested training of frontline staff or having Best Start Champions' or 'embedded workers' in each Local Authority of Health and Social Care Partnership, to promote the scheme to frontline staff. As were options to integrate the application process into health visitor and midwifery appointments, within NHS resources such as 'Ready Steady Baby!', into welfare rights, food poverty and financial inclusion services run by the third sector, and within information sent to schools and ELC providers.

Retailers were also seen as important for promoting awareness and uptake amongst users as the most immediate point of contact with service users. Suggestions for how retailers could be involved included:

However, it was felt that, for retailers to play this role, they would need to have more information and training on the programme and receive practical support with the promotion.

Creating a positive image around Best Start Foods to help reduce stigma associated food vouchers was seen by many respondents as important. Most respondents welcomed the shift from paper vouchers to smartcards, which they believe carry less stigma and suggested that the design of the Smartcard could further contribute to this. A few respondents mentioned that they welcomed the change in terminology from 'Welfare' Foods to 'Best Start' Foods. Some respondents suggested a universal rather than targeted public education and awareness campaign to normalise the use of the system.

A majority of respondents stated that making the application process as simple as possible was important to increase uptake of the programme. A number suggested that further consideration should be given around language and literacy barriers to engaging with the service. A majority of respondents thought that an automatic enrolment upon confirmation of pregency by healthcare staff with an opt out option would also increase uptake. Many respondents felt that it would be useful to widen the range of staff that can sign off the application form to recognise that other professionals are likely to have regular engagement with parents and families in need. This included allied health professionals, social workers, early years providers and community workers. Some respondents also advocated for removing the need to re-apply when a baby is born to simplify the process.

Some respondents recommended further eligibility for groups such as women with insecure imigration status, women under 20, single women in receipt of Maternity Allowance, families in reciept of Council Tax reduction, and low income families who only marginally exceed the income limit or who have fluctuating incomes.

Views on the smartcard system

There was consensus amongst respondents that for the new smartcard system to work, there needed to be choice about the retail establishments that would accept them, and therefore as many retailers needed to be invovled. Respondents felt that removing the need for retailers to register would help increase choice. There was concern that choice may be limited in smaller and rural areas and for access to retailers without card payment or who were unable to afford the charge for card payments and a long wait time for reimbursement.

In terms of making the system user-friendly, respondents suggested that people should be able to easily check their balance, carry forward unused funds and have easy access to replacement cards for those lost or stolen. Respondents also stressed the importance that they look like bank cards. Respondents suggested that training for retailers may be required to make the system easy to use and that the Scottish Government regularly seek feedback on the system from users, retailers and stakeholders.

Views on the value of support

Many respondents valued the proposed increase in weekly value from £3.10 to £4.25 and widen the range of eligible foods. However, a few respondents felt that the limit was still too low.

A large marjority of respondents thought that the Scottish Government should go beyond providing payments to support families to establish healthy eating patterns. The recommended activity includes:

Views on eligibility for children's vitamins

50% of respondents disagreed with the proposal that eligibility to children's vitamins be linked to eligibility for Best Start Foods, compared to 40% who were in favour. Respondents felt that vitamins should be provided universally to all children under three years of age with many respondents wanting to see the eligbility age to increase to five in line with current health guidance.

90% of respondents agreed with the proposal to provide free milk to all children in funded ELC provision from 2020, although many respondents pointed out that dairy-free alternatives should be available. It was also argued that consideration should be given to the funding and provision of the milk offer.

96% of respondents agreed with the proposal to provide a healthy snack to all children in funded ELC provision from 2020. Clarification was sought by many respondents on what constituted a 'healthy snack', and some thought it should be restricted to a portion of fruit or vegetables. Similar comments were made regarding the funding and provision of snacks as with milk.

Although it was not explicitly asked, a large majority of respondents were in favour of providing free milk to children outwith funded ELC provision. It was suggested that this could be administered through: a voucher or smartcard, direct payments to childcare providers (similar to the current UK Nursery Milk System), or by embedding milk for non-funded ELC provision in the wider procurement of milk for childcare providers within each local authority.

Overall, respondents were supportive of the proposals included in the consultation document – with the exception of the proposal to link the eligibility of children's vitamins to Best Start Foods, where a majority of respondents felt they should be provided universally.

No significant differences were observed between the positions of individuals and organisations, or between those of different types of organisations.

The responses point to areas that could be explored further by the Scottish Government. These include:

A common theme that was observed across responses was the wish by different respondent categories to be involved in further conversations around these issues. These include, particularly, childcare providers, local authorities, retailers and third sector or community organisations. Many respondents explicitly offered their support in the future development of these proposals.

Another common theme was the possibilities offered by technology and how to best harness them. The move from paper vouchers to a smartcard was seen very positively by respondents. Social media and smartphone technology also featured prominently in responses – as a way of engaging parents and families, collecting feedback and impact data, or even as a means to make Best Start Foods payments.