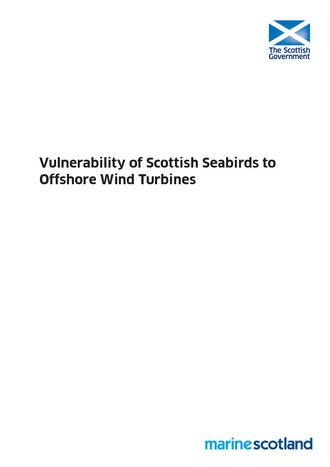 The primary value of this work will be to inform wider marine planning (e.g. SEAs) for future rounds of development. The use of sensitivity scores in current project level ornithological assessments, and particularly Habitats Regulations Appraisals, will be largely limited to the scoping stage. Scores will assist in the preliminary identification of species that will be sensitive to the effects assessed (collision, displacement, and to some extent, indirect effects on prey). More explicit site and population specific assessments will need to be made once baseline data are collected from specific development sites under consideration.

In order to meet targets for reduction in carbon dioxide emissions, development in Scottish waters of offshore wind farms is being encouraged by the Scottish and UK Governments. However, such development may potentially have adverse effects on some species of seabirds through collision, disturbance, or habitat loss.

Scotland holds internationally important populations of many seabird species (Mitchell et al. 2004; Forrester et al. 2007). Many seabirds in Scotland breed within Special Protection Areas ( SPAs) and so are protected by European law, in particular the Birds Directive (2009/147/EC) under which Member States have designated SPAs for the conservation of specific Annex 1 bird species and qualifying migrant species.

This review considers impacts that offshore wind farms may have on seabirds. Our report is not trying to make any site-specific assessments, but is essentially looking at the cumulative picture; considering which Scottish seabird populations appear most vulnerable at a cumulative impacts level, considering breeding season, migration and overwintering periods.

Desholm (2009) argued that in order to prioritize bird species for assessment of the impact of mortality at wind farms, it is possible to consider just two criteria; population size and population 'elasticity' which is mainly determined by adult survival rate. Birds with small populations and high adult survival rates will be more severely impacted by wind farm mortality than birds with large populations and low natural survival rates. While that approach has the benefit of great simplicity, it does not take into account the fact that some kinds of birds are more, or less, likely to collide with wind turbines as a consequence of their species-specific ecology or behaviour. Nor does it take account of the possible effects of offshore wind farms on seabirds through non-lethal effects such as disturbance of flight paths or loss of foraging habitat. This review follows the approach developed by Furness and Tasker (2000), and successfully implemented for offshore wind farm hazards to seabirds in the southern North Sea, by Garthe and H◘ppop (2004). In particular, the set of scoring criteria and provisional scores for seabird species, is based on evidence taken from the reviewed literature, and has been circulated to a group of appropriate experts for moderation. This ensures that the final criteria and scores have wide consensus support from stakeholders, including seabird ecologists, and conservationists. Scoring is done for breeding seabirds and for nonbreeding (wintering or passage) seabirds. The list of seabird species to be included was drawn up by SNH ornithologists, and includes true seabirds, wintering sea ducks and grebes, and the white-tailed eagle (scientific names of the study species are listed in Table 2). A few seabird species of conservation importance that occur in Scotland (such as red-breasted merganser and little gull) were omitted from the list by SNH, on the basis that they occur very infrequently, if ever, at offshore wind farms, so their populations are assumed not be at risk from offshore wind farm development. In the case of red-breasted merganser their distribution is very strictly coastal and estuarine. In the case of little gull, not only are numbers visiting Scottish marine areas very low and mainly found in estuarine areas (Forrester et al. 2007) but there are no SPA sites for this species in Scotland. Marine Scotland emphasised the need for an evidence-based approach to the assessment, and in this regard the work by Garthe and H◘ppop (2004) provides the best evidence-based foundation, as their review of existing literature has not only used moderation by a panel of experts to provide a widely supported consensus, but has also been peer-reviewed, published in an internationally respected scientific journal, and widely cited subsequently. Therefore, we started with the structure established in the Garthe and H◘ppop (2004) paper. We reviewed all scores allocated by Garthe and H◘ppop (2004) individually. In many cases those given by Garthe and H◘ppop (2004) appear to be very appropriate. Where more recent data suggest that the Garthe and H◘ppop (2004) scores need modification this is clearly stated, and their scores have been modified.