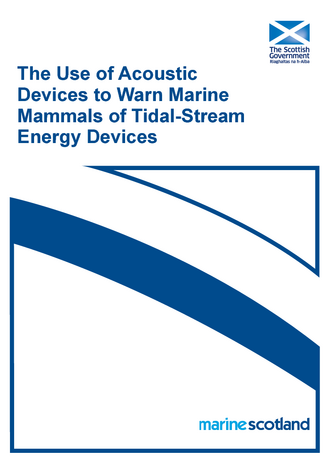 The incidence of marine mammals colliding with man-made objects (such as ships or fishing gear) is well-known and has received much attention in recent years. It is also conceivable that marine mammals will collide with marine renewable energy devices, with tidal-stream energy devices presenting the most obvious strike scenario. However, it is currently unknown whether injurious mammal-turbine collisions will actually occur with sufficient regularity to be of ecological concern. This is primarily because of the embryonic status of the industry, the limited range of installation sites, the diversity of species so far exposed and the spatial responses of mammals to devices.

For animals to exhibit appropriate spatial responses they will have to be able to accurately perceive the location of the turbines they approach. For marine mammals, vision and mechanoreception are unlikely to be useful senses for anything other than close-range evasion. Longer range upstream avoidance is more likely to come from their auditory senses particularly by picking up turbine noise. The distance that this sound will be audible will be influenced by several factors but particularly the local ambient noise conditions (which are likely to be greater in these sites than other coastal waters). If there is insufficient or inappropriate turbine noise then one solution would be to add further acoustic cues to turbines.

This report therefore explores the underwater acoustic characteristics of several inshore tidal-stream sites to determine whether or not there is actually a need for acoustic warning devices. It then goes on to investigate whether existing mammal warning acoustic devices developed for other applications might prove valuable in a tidal-stream context and if so what risks there may be of using such devices. This report finally goes on to consider what characteristics a purpose-built acoustic warning device might need.

To investigate the characteristics of tidal-stream sites we selected three straits on the west coast of Scotland of which two are of immediate interest to tidal-energy developers (Sound of Islay and Kyle Rhea). We measured and mapped the natural ambient soundscapes of each site over a variety of flow conditions (ebb, flood, springs, neaps). We found that ambient noise scaled with flow speed and showed considerable spatial variability across each site. Overall, the levels of ambient sound were higher than less energetic coastal sites.

Existing acoustic warning equipment developed to dissuade seals from approaching fish farms, warn marine mammals of fishing gear, steer fish away from power stations and other applications were reviewed both in terms of their efficacy and potential audibility for marine mammals in tidal-stream sites. This examination showed that the deployment of off-the-shelf acoustic devices developed for other applications, would be inappropriate in a tidal energy context. If the range of warning is too small, as appears to be the case for equipment known as Acoustic Deterrent Devices ( ADDs), then animals are not be given sufficient time or space to avoid a turbine encounter. In contrast much louder equipment such as Acoustic Harassment Devices ( AHDs) are likely to be detectable at ranges far greater than the sphere of influence of an individual turbine or even an entire array. Accordingly, there is the risk of significant habitat exclusion. Furthermore, habituation is a concern for any equipment, especially if a single source is used to mark an array of turbines.

Given the discrete point source of threat (i.e. individual turbines and the rotors in particular) coupled with the investment and infrastructure associated with tidal-stream developments, then more sophisticated acoustic warning devices would not be out of place to help mitigate a collision issue, should one prove to exist. If a warning system were to be built then this report describes seven attributes that should be considered. These were that: (1) the signal must elicit an appropriate response (2) emission rates must suit approach velocities (3) emission frequencies must be audible for target species (4) amplitudes must be appropriate for detection ranges and sites (5) signals must be directionally resolvable (6) the warning should be co-ordinated with the threat and (7) the location of the sound sources at a turbine or within an array must facilitate appropriate spatial responses.

Finally, this report emphasises that in the face of a potentially attractive mitigation option, any active acoustic warning also represents a new source of sound pollution, specifically intended to alter the behaviour of marine mammals in tidal-stream habitats. While it is unknown whether there is actually a real (rather than perceived) mammal-turbine collision problem, we should consider carefully whether or not it is appropriate to deliberately add extra-noise to the sea as a precautionary measure. Nevertheless, while further information on the collision issue is likely to emerge as turbines are deployed over the next few years, the acoustic warning option should continue to be explored and not shelved pending that outcome. The use of acoustic warning equipment, if appropriately designed, could prove a valuable mitigation tool should a collision problem become apparent.

Introduction - Is there a collision issue?