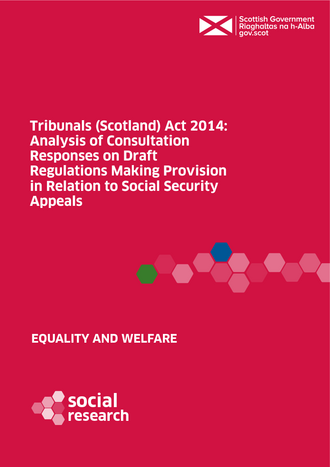 The Scotland Act 2016 transferred new powers to the Scottish Parliament relating to social security, including responsibility over certain benefits.

As part of its ongoing commitment to engage key stakeholders in the future development of social security in Scotland, the Scottish Government committed to a series of social security related consultations. One such consultation related to the draft Regulations making provision in relation to Social Security Appeals and the findings from that consultation are set out here.

The consultation opened on 22 January 2018 and ran until 16 April 2018. It included a total of 7 closed and 22 open questions and a total of 25 substantive responses were received (4 from individuals and 21 from organisations).

Given the small number of individuals compared to organisations who responded, and the small numbers of responses overall, it was not possible to carry out any reliable disaggregate analysis to compare responses between 'types' of respondent. The views presented here should also not be taken as representative of the wide range of stakeholders invited to respond to this consultation.

The analysis of responses suggests the following main findings in relation to each of the six core sets of draft Regulations set out in the consultation [1] .

Annex B - adding the Social Security chamber to the list of chambers into which the First-tier Tribunal for Scotland is divided:

Annex D - the type and number of members of the FtT who can consider cases before the Social Security chamber and, when cases are appealed from there, before the Upper Tribunal for Scotland:

Annex E - the eligibility criteria for appointment to the FtT of ordinary members with medical and disability experience. These members, alongside legal members of the Tribunal, will be responsible for deciding cases coming before the Social Security chamber:

Acting on the Consultation Findings

The consultation contributes to an already ongoing process to clearly set out how the new Tribunal system for Social Security appeals will operate. This report, alongside the responses themselves, will be published and used to inform consideration of updating the regulations to ensure they are operationally deliverable. Going forward, as each devolved benefit is developed, the Scottish Government will continue to consult all stakeholders in line with its commitment to co-design Scotland's Social Security system.

On the whole, there was support for the establishment of the new chamber of the First-tier Tribunal, and for it to be added to the list of chambers into which the First-tier Tribunal for Scotland is divided. The main feelings expressed were that greater clarity on the description of functions exercisable by the Social Security chamber may be required, as well as greater clarity on the specific Rules of procedure for both the First-tier Tribunal and Upper Tribunal, where cases are appealed. Ensuring balanced representation of appointed members to both Tribunals was also seen as key. All respondents agreed that fairness, dignity and respect should be at the heart of any future change and were keen to see the engagement process continue beyond this consultation alone.