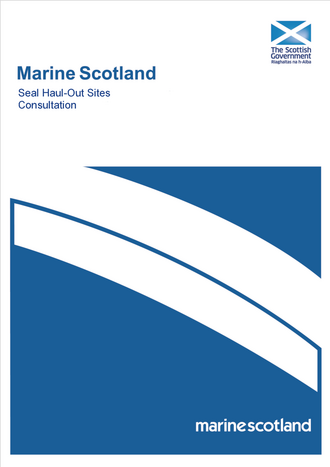 The purpose of the consultation process was to obtain stakeholders views and their comments on the list of potential haul-out sites at national, regional and local levels.

Marine Scotland received 55 Consultation responses and all have now been considered and analysed. The replies have been separated into five groups and consist of views and comments from 13 NGO's, 9 local (tourism) businesses, 8 other industries that operate in the coastal areas, 18 individuals and 7 responses came from other governmental departments or conservation agencies (see Table.1 & Fig.1 attached below).

The majority of replies (76%) were supportive of the overall proposals at national/regional/local level, 2% were neutral, 9% wanted fewer sites and 13% were against the proposals (see Fig. 2a & 2b).

A number of NGO's and individuals suggested additional sites be included and a few responders wanted all haul-out sites be protected. It would be impossible to designate all areas where seals haul-out because these depend entirely on the behaviour of individual seals. Marine Scotland aims to nominate and protect those sites which offer an optimum balance between maximising protection for the largest number of seals while minimising possible impacts on other sustainable activities around the coast.

In response, Marine Scotland asked SMRU to undertake a review of all sites on the original list and as a result the total numbers of sites was increased from 146 to 194 and a number of individual sites were enlarged or expanded. It is important to point out that the final list of designated sites will be open to periodical review.

A number of small NGO's considered that the proposed legislation did not offer sufficient protection to seal breeding sites. In response, Marine Scotland asked SMRU to respond to these comments and as a result 45 specific breeding sites have been added.

A clear definition of ' harassment' was sought by the majority of respondents. A number of industries raised concerns that their activities around haul-out sites boundaries might be limited in the absence of clarity about what constituted harassment. In response, Marine Scotland has produced guidance which offers a definition of harassment and some examples of actions that might constitute harassment.

A number of organisations considered that greater protection was necessary in areas of declining numbers of seals. In response, Marine Scotland has asked SMRU to ensure that between 66% and 100% of the common seal population are covered in Shetland, Orkney, Western Isles, Moray Firth and East Coast where numbers are declining.

1a. Tables and Figures

Table 1 - Number of stakeholders involved in the Consultation