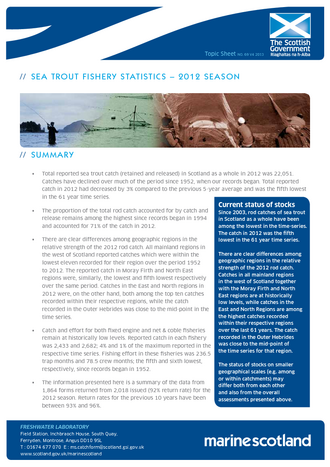 Since 2003, rod catches of sea trout in Scotland as a whole have been among the lowest in the time-series.The catch in 2012 was the fifth lowest in the 61 year time series.

There are clear differences among geographic regions in the relative strength of the 2012 rod catch. Catches in all mainland regions in the west of Scotland together with the Moray Firth and North East regions are at historically low levels, while catches in the East and North Regions are among the highest catches recorded within their respective regions over the last 61 years. The catch recorded in the Outer Hebrides was close to the mid-point of the time series for that region.

The status of stocks on smaller geographical scales ( e.g. among or within catchments) may differ both from each other and also from the overall assessments presented above.

Catch And Effort Reported By Scottish Sea Trout Fisheries In 2012