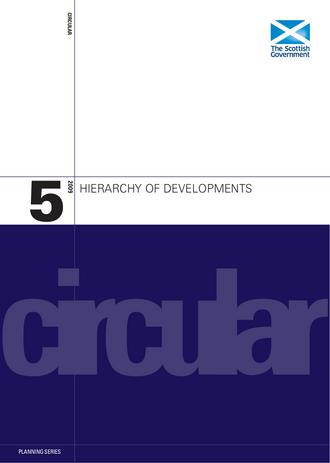 Circulars contain Scottish Government policy on the implementation of legislation or procedures.

Statements of Scottish Government policy in the SPP, NPF and Circulars may be material considerations to be taken into account in development plans and development management decisions.

Designing Places and the West Edinburgh Planning Framework have the same status in decision making as the SPP and NPF.

Further information in the Scottish Government's role in the planning system is available on http://www.scotland.gov.uk/Topics/Built-Environment/planning

1. The hierarchy is at the heart of the modernised planning system. The Planning etc. (Scotland) Act 2006 1 (the 2006 Act) introduced the hierarchy for planning in primary legislation. The hierarchy will help deliver Scottish Minister's aim that the planning system should respond in a more proportionate and efficient way to proposals that come before it.

2. It will ensure that applications are dealt with in an appropriate way to their scale and complexity, allowing decisions to be taken at the most appropriate level. Part 3 Section 5 of the 2006 Act inserts a new section 26A into the Town and Country Planning (Scotland) Act 1997 which defines the three categories in the hierarchy of development to which all developments will be allocated:-

The hierarchy is reflected in the diagram below.

3. This circular accompanies The Town and Country Planning (Hierarchy of Development) (Scotland) Regulations 2009 2 (the Hierarchy Regulations) which came into force on 6 April 2009. These regulations have been made by Scottish Ministers in exercise of the powers conferred by section 26A(2) of the Town and Country Planning (Scotland) Act 1997 and of all other powers enabling them to do so.

APPLICATION OF THE HIERARCHY - DEVELOPMENTS / GEOGRAPHIC / APPLICATIONS AND CONSENTS

4. The Hierarchy Regulations apply to all developments across Scotland, and to all land and waters covered by the Planning Acts. The reference to waters includes marine territorial waters (out to the 3 nautical mile limit) around Scotland, but only in so far as it relates to marine fish farming.

6. The hierarchy allows a proportionate approach to be used for dealing with planning applications depending on which of the three categories a development falls within. The procedures for making and handling planning applications vary between the three categories. Procedural matters including the making and handling of different categories of development are explained in Circular 4/2009 which accompanies the Development Management Procedure Regulations 3 .

8. Scottish Ministers are responsible for the NPF which is the long term strategy for the development of Scotland over the next 25 years. The 2006 Act put the NPF on a statutory footing. This means that it now provides a national context for development plans as well as informing the ongoing programmes of the Scottish Government, public agencies and local authorities. Scottish Ministers are committed to reviewing the NPF every four years.

9. Section 26A(2) of the Act gives Scottish Ministers powers to make regulations to describe classes of development other than national developments and assign each class to either "major developments" or "local developments".

10. The Act prescribes that it is Scottish Ministers who are to describe classes of major and local development. There is no scope for local interpretation of what constitutes a major development or local development either by planning authorities, by applicants or by other stakeholders in the planning system.

12. Regulation 2(1)(b) has the effect that an extension whether to an existing major or local development is only to be treated as major where the extension alone would meet or exceed the relevant appropriate threshold or criteria. The EIA Regulations at paragraph 21 of Schedule 1 already contains an equivalent provision for those types of developments. Some examples are provided below:-

13. In the Schedule of Major Developments the term 'area of the site' is used for measuring some of the thresholds or criteria against. Regulation 1(2) defines site as "the land to which development relates". Development is defined in section 26 of the 2006 Act as "the carrying out of building, engineering, mining or other operations in, on, over or under land, or the making of any material change in the use of any buildings or other land, or the operation of a marine fish farm", subject to a set of seven exceptions of operations or uses of land which do not constitute development such as local authority or statutory undertakers works.

14. Accordingly references to 'site' in the Hierarchy Regulations are to solely the area to which development relates. A larger area of land may be in the ownership of the applicant, but if this is not the subject of development in the particular application it should not be taken into account in measuring whether a development is "major".

15. Developments which are for change of use and do not involve construction will typically not be "major developments" since Classes 2-6 and 9 in the Schedule of Major Developments specifically refer in the description of development section to "construction".

19. Schedule 1 of the regulations contains the classes of major development. Further information on each class is provided below.

22. The first part of the thresholds relates to where the development has 50 of more dwellings, this includes flats as well as houses. The second part of the threshold is for cases where there may be fewer than 50 dwellings but the area of the site is or exceeds 2 hectares. When considering whether a housing proposal is a major development under the terms of the second threshold only the area subject to the construction of buildings, structures or erections should be taken into account.

24. This class primarily covers new construction rather than changes of use, unless they involve construction of structures or other erections. It relates to where the gross floor space constructed as a result of the development exceeds 10,000 square meters. Equally, the threshold relates to where the area of the site is or exceeds 2 hectares, as described in paragraphs 13 to 15.

26. The following developments are part of a different consent regime under the 1989 Electricity Act 6 and are governed by those procedures:

28. This class covers the construction of new or replacement roads, railways, tramways, waterways, aqueducts or pipelines. In some instances such proposals may be progressed through the Transport & Works (Scotland) Act 2007 7 system.

29. In relation to cycleways or walkways which are legally constructed as roads so fall within the description of development in this class, which exceed the 8 kilometre threshold these would also be classified as a "major development".

30. This class is for fish farming including for finfish and shellfish. The definition of equipment is provided at section 26(6) of the 1997 Act. This includes tanks, cages, long-lines and other types of equipment such as feed barges for use in fish farming.

32. This class applies to all waters covered by the Planning Acts, both freshwater and those within Scotland's marine territorial waters (out to the three nautical mile limit).

33. This class for Minerals relates specifically to the extraction of minerals (including underground workings). It does not include the storage of minerals or other types of mining operations which may fall within Class 9 of the hierarchy. In the case of an application for a new site, the area against which the threshold is measured, should only be the area where extraction is proposed.

34. In the case of an existing major minerals site which has consent, where the operator wishes to put in an application for an extension, only the proposed new area of extraction should be taken into account in determining whether the extension application is for a "major" or "local" development.

35. This class covers any development not falling wholly within any of the other classes of major development. This would include, but is not limited to, retail, leisure and entertainment, education, healthcare, community facilities, transport interchanges, water and drainage developments and projects.

36. This class also covers mixed use projects, whether the project involves a combination of developments described in the other paragraphs, eg a mixed housing (Class 2) and business (Class 3) scheme, or a mixed use project which includes different uses which have not been listed in classes 1 to 8.