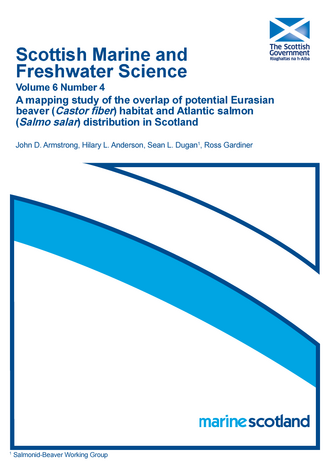 Atlantic salmon are both a species of conservation importance listed under the EC Habitats Directive and the target of important Scottish rural fisheries. Scottish Government is considering the possibility of formally reintroducing the Eurasian beaver. In assessing the option, it is important to consider possible positive and negative effects of beavers on salmon. An important first requirement is to establish whether there would be substantial overlap of potential beaver habitat and known Atlantic salmon distribution. This issue was addressed using a Geographic Information System ( GIS) to compare the current known distribution of Atlantic salmon in six river catchments with predicted beaver distributions should these animals be reintroduced and use all available suitable habitat. At the full catchment scale in the six rivers (Awe, Ayr, Conon, North Esk, Tay and Tweed), the percentage wetted area of salmon habitat likely to occur in proximity to potential beaver habitat (termed percentage overlap) ranged from 47-73%. In all six rivers the percentage overlap was greatest in major rivers (predominantly main stems) >10m in width (54-87%). In minor rivers <10m in width, that is predominantly tributaries, overlap ranged from 15% to 59%. Results of the mapping exercise are discussed in relation to understanding possible positive and negative effects of beavers on Atlantic salmon. While the figures presented here estimate the percentage spatial overlap in distributions of these species, impacts of beavers would likely extend further upstream and downstream of this physical overlap. Thus, in interpreting the findings of this study, the influence of beavers on salmon populations throughout moorland streams above beaver dams is identified as being a particular risk to weak salmon populations, whereas benefits of the presence of beavers might be accrued in other areas downstream.