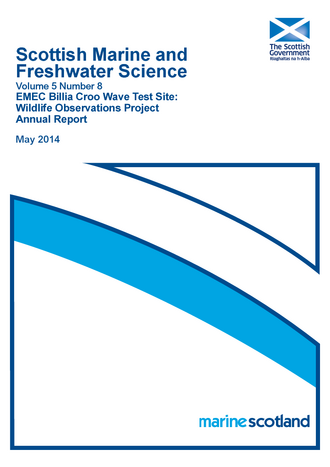 A key concern expressed by policy makers, regulators and environmental stakeholders about deployment of marine energy devices in open waters relates to the possibility of negative impacts they may have on marine mammals and diving birds. The potential for direct collision with such devices, or harmful effects caused by their presence, including the potential for displacement of marine wildlife from habitual waters, are issues which need to be addressed. In order to get as accurate a picture as possible about the presence and behaviour of marine wildlife in the vicinity of operating devices, data needs to be collected both underwater and at the sea surface. The current wildlife observation programme underway at the European Marine Energy Centre ( EMEC) in Orkney gathers surface-visible wildlife information across EMEC's grid-connected and nursery test sites, and the data gathered can be used to inform regulatory decision-making, as well as in guiding developers' device-specific wildlife monitoring programmes.

The Billia Croo wildlife observation project commenced in July 2005, with the Scottish Government funding the current contract. During the period 1 April 2013 to 31 March 2014, a total of 886 hours of observations were completed. Observations at the site for this reporting period have shown seasonal peaks in grey and harbour seal abundances corresponding with pupping seasons, which is mirrored in the data collected to date at the site. During this reporting period the majority of cetacean sightings have been of White-beaked Dolphin, whereas typically the most sighted cetacean is Harbour Porpoise. A typically diverse range of marine birds has also been observed, although for several species, numbers in April and May 2013 fell below the mean. This could be due to the enduring winter of 2012/2013 and resultant late spring experienced in Orkney as was the case for the rest of the UK.