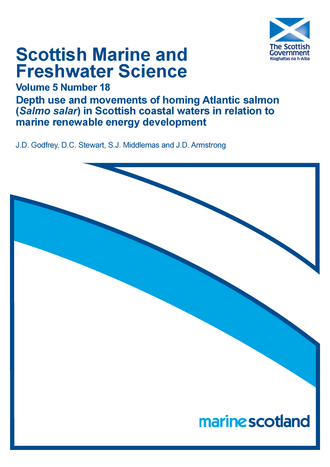 The depth use of homing Atlantic salmon caught and released on the north coast of Scotland was recorded over 1-20 days using pop-up satellite telemetry during the summers of 2013 and 2014. Data were returned from 47 out of 50 salmon tagged in 2013 and 80 out of 85 salmon tagged in 2014. Overall the fish were predominantly surface-orientated, spending a median of 80.4% of their time in the upper 5m of the water column. There was, however, significant variation between individuals: the time spent in the upper 5 m ranged from 8-99%, while individual median swimming depths ranged from 0-28.5 m. All fish undertook dives to below 10m of depth and the mean maximum depth was 67 m (range 13‑256 m), of similar magnitude to the likely available water depth. Pop-up locations were obtained for 122 tags and indicated that salmon swam in all possible directions from the release point.