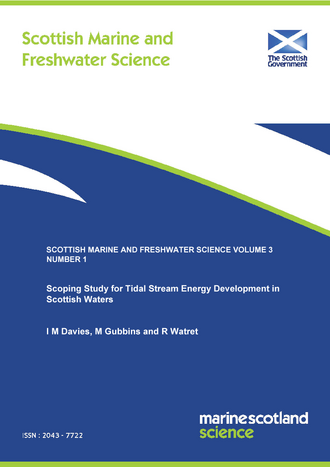 The Scottish Government has set a range of challenging targets for energy and climate change. These recognise the potential to take advantage of the extensive marine energy resources (wind, wave and tidal power) available in Scottish waters and include meeting at least 30% of total energy demand from renewable sources by 2020, incorporating:

To assist in meeting these targets, the Scottish Government has adopted an iterative approach to marine planning for the renewable energy sectors. A Sectoral Marine Plan for Offshore Wind Energy in Scottish Territorial Waters (Blue Seas - Green Energy) sets out the Government's vision for developing offshore wind energy up to 2020 and beyond and has identified short term development sites for offshore wind up to 2020, with a potential to deliver almost five Gigawatts (GW) of electricity generation capacity. A new Scoping Study extends the potential development area out to 200 nm.

A sensitivity analysis of the process used to develop the offshore wind Plan concluded that, as additional data and monitoring information and improved data handling procedures become available, these should be incorporated into the emerging iterative marine planning process.

A process was therefore put in place by Marine Scotland to develop a Scoping Report for the potential for tidal stream energy development in Scottish waters out to 200 nautical miles, building on the Scoping Study undertaken for the Saltire Prize (Harrald and Davies, 2010). This report describes the process employed by Marine Scotland in collaboration with The Crown Estate to develop a series of new offshore tidal stream energy plan options within Scottish marine waters.

The Crown Estate spatial modelling tool MaRS was used to create multi-factorial expressions of the technical opportunities and constraints on tidal stream energy development in Scottish waters, and of the constraints on consenting presented by themed groups of factors. These themes reflect current commercial (industrial) activities such as fishing, aquaculture and offshore oil and gas, environmental factors such as designated Natura sites and the distributions of certain sensitive species and a broad field of socio-cultural interests including recreational uses, archaeological potential, visual and landscape factors. These models have been combined and used to develop overall expressions of the relative degrees of constraint. The sensitivity of the process was investigated through the creation of a series of combined models altering the relative influence of each the themes. Considerable similarities were found between the combined models, and the model that weights the three themes equally was taken forward and used to develop areas of search for plan options for tidal stream energy developments within Scottish Territorial Waters ( STW).

The options indentified are shown in Figure S1 and listed below.

The potential locations for tidal stream energy developments are strongly limited to the locations where sufficiently strong tidal currents occur. These areas are confined to coastal and near shore waters where the large volumes of water involved in tidal fluxes are constrained to pass through firths and sounds (such as the Pentland Firth), or round headlands (such as off the south west of Islay).

The tidal stream energy resource areas in Scotland are:

The identification of resource areas has been based upon tidal stream information on a grid scale of 1.8 km ( DECC, 2008). Resource areas smaller than this may well not be represented, and areas up to the scale of a few cells may be poorly represented. It is well known that there are a large number of small areas around Scotland where tidal streams are at times powerful. These include areas at headlands, areas around sills at the entrances to sea lochs (and separating basins within sea lochs), and in channels and sounds between islands and between islands and large land masses. Such areas will not have been captured by this scoping study, but in favourable locations may offer considerable potential for small (and perhaps medium) scale developments for testing or commercial purposes.

There are currently no areas of Scottish marine waters outside STW where tidal streams are sufficiently fast to generate commercial interest based on current tidal stream technologies.

The outputs from this study will inform the marine planning process by leading to the development of Regional Locational Guidelines ( RLG) for tidal stream energy development, which in turn will be the basis for the Sustainability Appraisal to cover tidal stream energy development in Scottish waters. This process involves Strategic Environmental Assessment ( SEA), Habitats Regulations Appraisal, Socio-economic Assessment, as well as statutory consultation with key sectors, stakeholders and the wider public.