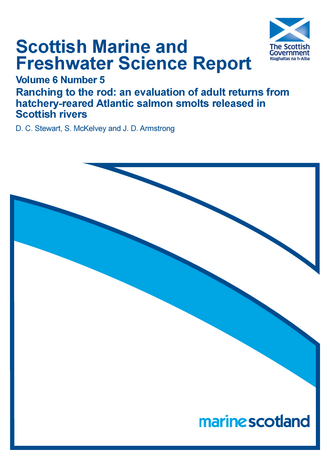 The introduction of hatchery-reared Atlantic salmon smolts to rivers in support of local salmon fisheries (termed ranching) is a controversial subject with little information available to fishery managers on the value of the method in a Scottish context. Here we present recapture data from monitored smolt releases on four Scottish rivers and compare return rates of hatchery and wild-reared salmon smolts originating from a common stock on two of these rivers. Rod recapture rates from stocked hatchery smolts ranged from 0-0.23%. In comparative tests return rates for wild-reared fish were on average ten times greater than those for stocked fish (range 6 to 13-fold where at least one reared fish returned). Given the relatively poor returns and associated production costs any benefit to fisheries of stocking with hatchery-reared smolts is unlikely to be sustainable in the Scottish context. Furthermore, risks of adverse genetic effects should be considered.