Contents
Scottish Marine and Freshwater Science Vol 6 No 13: A multidisciplinary approach to collection and use of VMS data from an inshore scallop fishery
1 Introduction 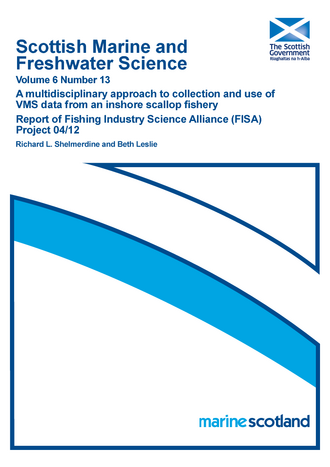 The Shetland Shellfish Management Organisation ( SSMO) manages the shellfish fishery around Shetland, out to the six nautical mile limit, under the Shetland Islands Regulated Fishery (Scotland) Order which has been in operation since 2000. The Regulating Order covers several commercially fished shellfish species including the king scallop ( Pecten maximus) and includes powers for the SSMO to restrict access to potential fishing grounds on a temporary or permanent basis. Management measures must be approved by Scottish Government ministers depending on the scale and legislative requirements.

During 2010 the SSMO, following consultation with local fishermen, proposed a set of 22 voluntary closed areas to scallop dredging activity to help eliminate any possibility of interaction with protected habitats, namely horse mussel ( Modiolus modiolus) and maerl beds, found within six nautical miles of Shetland. Modiolus modiolus and maerl beds have been identified as being threatened and requiring conservation under the UK Biodiversity Action Plan ( UK BAP). They are also listed as OSPAR habitats and as Annex I habitats under the EU Habitats Directive. The location of each proposed closed area was initially based on historical point records and 'predicted species bed' data of M. modiolus, maerl, and Zostera from various sources and agencies which had been combined and collated in the Shetland Islands' Marine Spatial Plan ( NAFC Marine Centre, 2014). Surveys were then carried out at each area in order to determine the presence of any protected habitat, quantify the scale of that habitat, and refine the closed area boundaries (Shelmerdine , et al., 2013; Shelmerdine , et al., 2014). As a result of this work, the refined closed areas were legalised and came into force in 2011. In March 2012, the Shetland scallop dredge fishery was awarded Marine Stewardship Council ( MSC) accreditation.

Vessel Monitoring System, or VMS, is the generic name given to a satellite-based monitoring system which provides information on fishing vessels' speed, course, and location. In Scotland, each data package (termed 'ping') is sent to a land-based receiver station via satellite every two hours. It was first used to monitor fisheries by the European Union ( EU) in 2000 and is now considered a standard tool to monitor fisheries worldwide. All fishing vessels greater than 12 m in length are legally required, under EC Regulation 2244/2003 and Scottish Statutory Instrument ( SI) 392/2004, to have a working VMS unit, of a specific type fitted [1] . This covers a small portion of the inshore shellfish fleet in Shetland but would not provide an adequate resolution, at the current two hour reporting period, to determine for example if a vessel fished within a closed area. Skaar , et al. (2011) showed that with a two hour reporting interval, a maximum variation of 8 km was recorded between the actual vessel track and the VMS pings. Such a large variation could have a significant impact when looking at inshore vessel movements which can operate very close to shore with the majority of fishing activity lasting less than the two hour ping period. Using VMS to map fisheries is not a new concept (for examples see Witt and Godley, 2007; Pedersen , et al., 2009; Bastardie , et al., 2010; Campbell , et al., 2014) but all these studies focussed on the offshore fishery using a ping period of one to two hours. A more regular ping rate would be required in the inshore fishery for VMS to be a useful tool for fisheries managers in order for them to effectively maintain sustainable inshore fisheries. Understanding the movements and activity of the inshore fishing fleet in Shetland and Scotland, information which has historically not been present, will provide valuable information on any potential interaction between identified and protected habitats with fishing gear. The information produced could also aid fishery managers in informing spatial management measures for the fishery, could be incorporated into the stock assessment process, and has the potential to feed into marine spatial planning decisions.

The main aim of this work was to trial the use of Succorfish's SC2 VMS tracking technology on vessels from the inshore scallop dredge fleet around Shetland and to evaluate its effectiveness as a tool for informing management decisions and protecting the environment, specifically looking at: