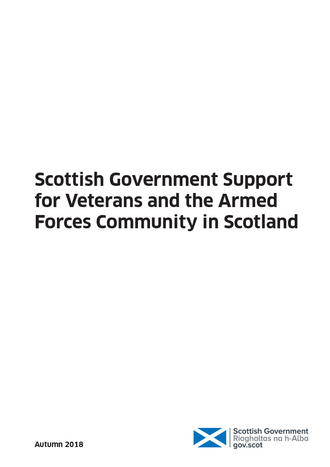 This document accompanies the Scottish Government’s second annual update to Parliament about our support for our veterans and Armed Forces community in Scotland.

Very much like my predecessors in the role of Scottish Veterans Minister, I admire the dedication and professionalism of all those who choose to follow a career in the Armed Forces. I am delighted to have taken on the role from my colleague, Keith Brown MSP who made the championing of the Armed Forces community such a high priority. I am determined that I too, will carry on seeking ways to improve services for our diverse and greatly admired Armed Forces community in Scotland.

I am keen that their experience of life in Scotland is the best it can be and that after serving, they choose to make Scotland their permanent home. To that end, I am pleased to set out our progress since the first annual update to Parliament in November 2017, but also areas where we now need to focus over the year ahead. This document therefore provides an update on our work to take forward the recommendations in the Veterans Commissioner’s 2018 report on Health and Wellbeing, but also provides some headlines to highlight activities in other areas. The final section covers future priorities and I am clear that we need to continue to look across the whole of our business in the Scottish Government to drive progress.

This autumn has seen a change to our Scottish Veterans Commissioner. Still the only such role in the UK dedicated to our Armed Forces veterans, our inaugural Commissioner, Eric Fraser CBE, stepped down after four years in this vital role. I should like to thank Eric for all his work in supporting veterans and for raising the profile of our talented Service leavers. And I welcome our incoming Commissioner, Charlie Wallace, who took up the role shortly after leaving his exemplary career in the Armed Forces and his final post as Deputy Commander of 51 st Infantry Brigade and HQ Scotland. The role of the Commissioner provides important scrutiny and I am very much looking forward to working with Charlie in the months ahead.

I finally want to reflect on the added significance that this year has, as 2018 marks the 100 th anniversary of the conclusion of the First World War. We have seen communities from all parts of Scotland proudly remember the sacrifices of our Armed Forces personnel, past and present, and stand together to pay fitting tributes throughout the commemorations. This year has also seen several other anniversaries, including the 100 th anniversary of the formation of the Royal Air Force which has not only allowed us to reflect on the past but has also been an important reminder of the innovation and vast range of skills that our Armed Forces possess. When leaving the Armed Forces, those transferrable skills are rightly in great demand by employers across Scotland and I am personally committed to doing all I can to help veterans realise their full potential in civilian life.