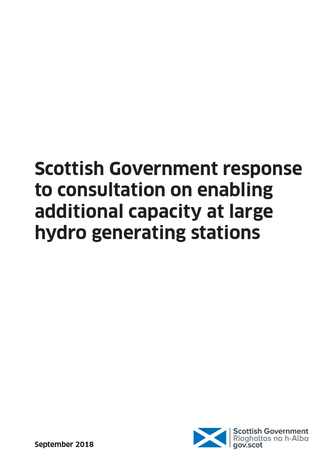 1. This document provides an analysis of responses to the above consultation, which was published in March 2018. The Scottish Government asked for views on an amendment to the Renewables Obligation (Scotland) Order (the ROS) 2009 to enable hydro-electric generating stations in Scotland to increase their declared net capacity above 20MW, whilst retaining eligibility for Scottish Renewables Obligation Certificates ( SROCs) in respect of original ROS accredited capacity only.

2. The consultation closed on 12 June 2018, receiving a total of 12 responses. These came from a broad range of stakeholders, including energy companies, the industry regulator, trade bodies, organisations concerned with potential impact on the environment, and one interested individual. Eleven of the respondents gave consent for the Scottish Government to publish their response. These can be viewed at https://consult.gov.scot/energy-markets/renewables-obligation/.

3. All responses were broadly supportive of the proposed change, regarding the lifting of the 20MW cap to be pragmatic, consistent with Scottish Government efforts to increase renewable generation and decrease carbon emissions, and ensuring no additional cost to consumers.

4. A number of responses highlighted the need for additional steps to be taken in line with the proposed change, each of which is considered below.

5. i. Measurement of output from additional ‘excluded’ capacity

A number of responses noted that any electricity generated by ‘excluded’ capacity at a hydro station would need to be measured separately from that generated from eligible capacity, in order to ensure that no additional SROCs are awarded. Ofgem’s response confirmed that, in order for hydro generating stations to retain their current SROC eligibility, separate metering would have to be installed to capture the additional excluded electricity generated. If this is not an option, legislation allows for the total output of the station to be pro-rated across the original accredited and additional excluded capacity (a measure which would likely reduce the station’s SROC return).

SG response: The Scottish Government agrees that this is an important point for industry to consider.

6. ii. Eligibility for other support schemes

Innogy Renewables UK highlighted in its response the need to ensure that additional ‘excluded’ capacity is not eligible for support through the Feed-in Tariff (FiT) scheme. As Innogy suggests, provisions in The Renewables Obligation (Scotland) Order 2009 preclude any electricity generated by a station in receipt of the FiT from being issued any SROCs.

SG response: The Scottish Government will work with the industry regulator, Ofgem, to ensure that there is no practical risk of generators applying for the FiT in relation to ‘excluded’ capacity. We note, too, the UK Government’s proposed closure of the FiT scheme to new applications after 31 March 2019.

The Tay District Salmon Fisheries Board ( TDSFB) raised concerns regarding possible impacts on the water environment arising from increased generation at a site. For example, new infrastructure may be required, or the use of extra water for generation may mean there is less water available for the environment.

SG response: Any changes likely to have an adverse impact on the water environment or migratory fish would require the operator of the station to contact the Scottish Environment Protection Agency ( SEPA), seeking a variation to its existing CAR (Controlled Activities Regulations) licence. This process will ensure that any proposed changes at a site to facilitate increased generation can be properly considered by SEPA, and any necessary mitigation put in place.

8. The TDSFB refers specifically to a decision taken by Scottish Ministers in 2011 to try to strike a balance between hydro generation and the protection of Scotland’s water environment and migratory fish. This approach was based on the premise that an annual loss of up to 2% of Scotland’s total renewable generation capacity, based on 2010 generation figures, was reasonable to secure environmental improvements at pre-existing hydro schemes. This cap of 2% equated to 100 GigaWatt hours (GWh) per year and was incorporated into Scotland’s River Basin Management Plans in 2015. The TDSFB asks whether, in light of the potential overall increase in generation capacity afforded by the proposed change, the existing cap of 100 GWh should be increased to retain sufficient water for the environment.

SG response: Since the original cap was introduced, SEPA has been working site by site with the hydro sector to consider what actions may be feasible for improving the water environment and migratory fish. This work has identified that environmental improvements originally envisaged at certain sites would be disproportionate or not technically feasible. As a result, SEPA’s current view is that all required environmental improvements from older hydro schemes in Scotland can be realised within the existing 100 GW/hours cap.

9. As a result of the positive stakeholder response to the consultation, and the anticipated increase in renewable energy generation in Scotland which the proposed change will trigger, Scottish Ministers intend to lay draft legislation in the Scottish Parliament as soon as possible, aiming – subject to Parliament’s agreement – to bring the changes into effect before the end of this year.

10. Scottish Government officials will continue to work closely with counterparts in Ofgem to ensure that its systems are able to reflect the change and ensure that SROCs are issued appropriately.