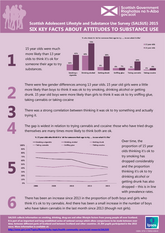 Scottish Adolescent Lifestyle and Substance Use Survey (SALSUS) 2015: Six Key Facts About Attitudes to Substance Use

1. 15 year olds were much more likely than 13 year olds to think it’s ok for someone their age to try substances.

3. There was a strong correlation between thinking it was ok to try something and actually trying it.

4. The gap is widest in relation to trying cannabis and cocaine: those who have tried drugs themselves are many times more likely to think both are ok.

6. There has been an increase since 2013 in the proportion of both boys and girls who think it’s ok to try cannabis. And there has been a small increase in the number of boys who have taken cannabis in the last month since 2013 (though not girls).

SALSUS collects information on smoking, drinking, drug use and other lifestyle factors from young people all over Scotland. It is part of an important and long established series of national surveys which allow comparisons to be made between over time, between different parts of Scotland and between Scotland and other countries. 25,304 pupils participated in the 2015 wave. More information is available at: http://www.gov.scot/Topics/Research/by-topic/health-community-care/social-research/SALSUS