Introduction by the First Minister of Scotland 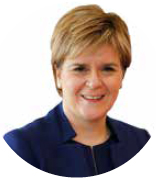 The Scottish Government believes the best future for Scotland is to be an independent country in order to build a fairer, more prosperous society.

It is a fundamental democratic principle that the decision on whether or not Scotland becomes independent should rest with the people who live in Scotland.

There has been a significant and material change in circumstances since the 2014 referendum and therefore, in line with the mandate received in the 2016 Holyrood election, and reinforced in subsequent UK general elections-most recently in December 2019-the Scottish Government believes people in Scotland have the right to consider their future once again.

The decision on whether a new referendum should be held, and when, is for the Scottish Parliament to make - not a Westminster government which has been rejected by the people of Scotland.

It is our position that a referendum should be held before the end of 2020 but the precise timing will be a matter for the Scottish Parliament to decide.

The Scottish Government is a strong advocate of the values of human dignity, freedom, democracy, equality, the rule of law, and respect for human rights.

We are therefore committed to an agreed, legal process which adheres to and celebrates those values, and which will be accepted as legitimate in Scotland, the UK as a whole, and by the international community.

Scotland is not a region questioning its place in a larger unitary state; we are a country in a voluntary union of nations. Our friends in the rest of the UK will always be our closest allies and neighbours but in line with the principle of self-determination, people in Scotland have the right to determine whether the time has come for a new, better relationship, in which we can thrive as a genuine partnership of equals.