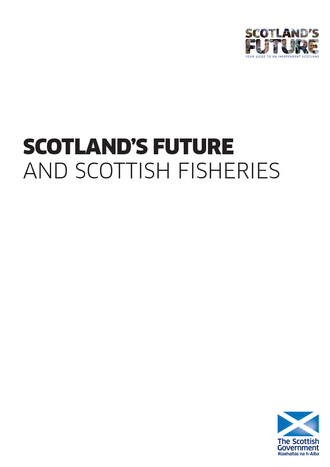 Scotland is one of the world's wealthiest countries. We are rich in human talent and natural resources. We have world-class industries and many economic strengths.

The most important decisions about our economy and society will be taken here in Scotland by the people of Scotland. Scotland's future will be in Scotland's hands.

Fishing is one of Scotland's great industries - one that has suffered more than most under the current constitutional arrangements and therefore has much to gain under independence.

As an industry it's far more important to Scotland than to the UK as a whole. Our fishing and wider seafood sectors will be a much greater priority in an independent Scotland.

We have a rich fishing heritage and the industry, together with its associated sectors such as processing, plays an important part in our economic success and in our social and cultural identity.

Scotland accounts for over two thirds of the UK's fishing industry yet UK Ministers don't allow Scottish Ministers to speak at European Councils where many of the big decisions are made affecting thousands of Scottish livelihoods - people working on fishing vessels, in our processing factories or at the quayside.

In my role as Scottish Fisheries Minister, I'm forced to sit in silence whilst other nations of Scotland's size - and smaller - make their case and negotiate on behalf of their countries. This is despite the fact that Scotland accounts for the fourth largest sea area in core European Union waters and that one fifth of the European Union's catch is taken from Scottish waters.

Fishing will always be an absolute priority for any Scottish Government.

To me it is inconceivable that any Scottish administration would ever describe Scotland's fishing industry as 'expendable', as Westminster civil servants did when preparing to bring the UK into the European Community and the damaging CFP.

An independent Scotland will be a powerful and respected voice at the top table. This will provide the ability to secure better deals for our fishing communities and make the case for ongoing reform of European fisheries policy to achieve sustainable economic growth and promote fisheries conservation.

We'll have our own representation across European and other international institutions. Our representatives will be 100% dedicated to Scottish interests and we won't have to dilute and compromise our priorities with the rest of the UK prior to EU negotiations.

During my seven years as Scottish Fisheries Minister I've worked with five UK Secretaries of State and five UK Fisheries Ministers. Again and again, both the industry and myself have had to bring my UK counterparts up to speed on the importance of Scotland's fishing industry - the largest in the UK - and its key priorities.

Scotland has a diverse and rich fishery - from large modern whitefish and pelagic fleets working off shore in the North East Atlantic out of our East Coast and Shetland ports, to inshore vessels catching highly prized langoustine from pristine waters off the West Coast, to scallopers operating nomadically along the breadth of the UK coast - all catching the highest quality seafood, much of it for export around the world.

Continued access to the European Union's single market of upwards of 500 million citizens and 20 million businesses is important for all of Scotland's goods and services, including our world-class fish, shellfish and fisheries products. Following a vote for independence the Scottish Government will immediately enter into negotiations with the UK Government and EU Member States to ensure that an independent Scotland achieves a smooth and timely transition to membership of the EU. Scotland will negotiate the terms of membership during the period we are still part of the UK and, therefore, still part of the EU.

This short paper sets out how Scotland's fisheries will be affected by independence - it answers important questions and focuses on five key gains for our fishing industry:

Gain 1. Fishing will be a national priority

Fishing will always be a priority in an independent Scotland and will never be used as a bargaining chip in wider negotiations. UK Governments have described the Scottish industry as expendable - but in Scotland our industry is invaluable.

Gain 2. Direct representation in the European Union and the ability to negotiate our own priorities without compromise

As a leading fishing nation, Scotland will bring a positive, cooperative but strong voice to the EU. As an equal partner with other Member States, we will have a stronger platform to ensure that fisheries policies are designed and implemented in ways that work for Scotland. An independent Scotland will be a leading voice for ongoing reform of European fisheries policy guided by the principle that more decision making should be at national and regional level.

An independent Scotland would receive its relative fair share of European fish quotas through a fixed arrangement, enshrined within the Common Fisheries Policy, and it would be able to keep quota holdings in Scotland for the benefit of the catching and onshore sectors. Only Member States can stop quotas being sold beyond their borders. Independence would also put an end to routine top-slicing of Scottish quota by the UK Government.

At present Scotland accounts for 8% of the European Union's fish landings but will receive only 1.9% of the total European Maritime and Fisheries Fund allocation. This is the disgraceful legacy of decades of poor negotiation by UK Fisheries Ministers. Securing a better deal will be a priority for an independent Scotland.

With independence, the industry's levies will remain in Scotland to support the priorities of our catching, onshore and wider seafood sectors, rather than helping to promote our competitors.