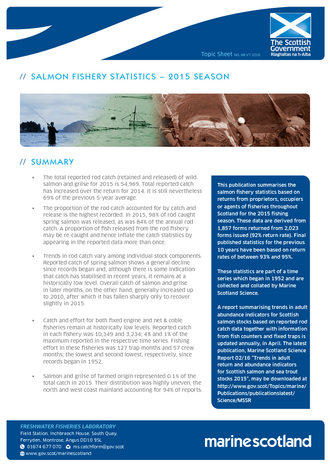 The total reported rod catch (retained and released) of wild salmon and grilse for 2015 is 54,969. Total reported catch has increased over the return for 2014. It is still nevertheless 69% of the previous 5-year average.

The proportion of the rod catch accounted for by catch and release is the highest recorded. In 2015, 98% of rod caught spring salmon was released, as was 84% of the annual rod catch. A proportion of fish released from the rod fishery may be re-caught and hence inflate the catch statistics by appearing in the reported data more than once.

Trends in rod catch vary among individual stock components. Reported catch of spring salmon shows a general decline since records began and, although there is some indication that catch has stabilised in recent years, it remains at a historically low level. Overall catch of salmon and grilse in later months, on the other hand, generally increased up to 2010, after which it has fallen sharply only to recover slightly in 2015.

Catch and effort for both fixed engine and net & coble fisheries remain at historically low levels. Reported catch in each fishery was 10,349 and 3,234; 4% and 1% of the maximum reported in the respective time series. Fishing effort in these fisheries was 127 trap months and 57 crew months; the lowest and second lowest, respectively, since records began in 1952.

Salmon and grilse of farmed origin represented 0.1% of the total catch in 2015. Their distribution was highly uneven, the north and west coast mainland accounting for 94% of reports.

This publication summarises the salmon fishery statistics based on returns from proprietors, occupiers or agents of fisheries throughout Scotland for the 2015 fishing season.

These data are derived from 1,857 forms returned from 2,023 forms issued (92% return rate). Final published statistics for the previous 10 years have been based on return rates of between 93% and 95%.

A report summarising trends in adult abundance indicators for Scottish salmon stocks based on reported rod catch data together with information from fish counters and fixed traps is updated annually, in April. The latest publication, Marine Scotland Science Report 02/16 "Trends in adult return and abundance indicators for Scottish salmon and sea trout stocks 2015" , may be downloaded at http://www.gov.scot/Topics/marine/Publications/publicationslatest/Science/MSSR

Catch and Effort Reported by Scottish Salmon Fisheries in 2015