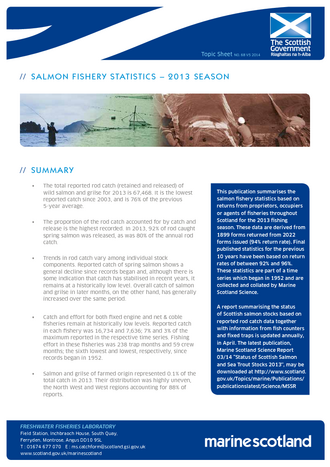 This publication summarises the salmon fishery statistics based on returns from proprietors, occupiers or agents of fisheries throughout Scotland for the 2013 fishing season. These data are derived from 1899 forms returned from 2022 forms issued (94% return rate). Final published statistics for the previous 10 years have been based on return rates of between 92% and 96%. These statistics are part of a time series which began in 1952 and are collected and collated by Marine Scotland Science.

A report summarising the status of Scottish salmon stocks based on reported rod catch data together with information from fish counters and fixed traps is updated annually, in April. The latest publication, Marine Scotland Science Report 03/14 "Status of Scottish Salmon and Sea Trout Stocks 2013", may be downloaded at http://www.scotland.gov.uk/Topics/marine/Publications/publicationslatest/Science/MSSR

Catch and Effort Reported by Scottish Salmon Fisheries in 2013