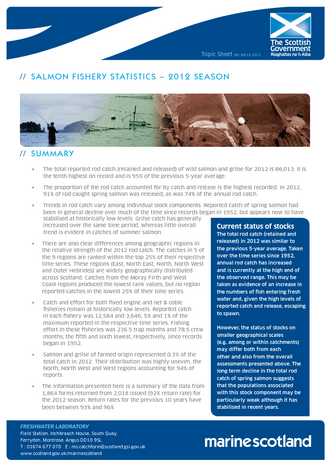 The total rod catch (retained and released) in 2012 was similar to the previous 5-year average. Taken over the time series since 1952, annual rod catch has increased and is currently at the high end of the observed range. This may be taken as evidence of an increase in the numbers of fish entering fresh water and, given the high levels of reported catch and release, escaping to spawn.

However, the status of stocks on smaller geographical scales ( e.g. among or within catchments) may differ both from each other and also from the overall assessments presented above. The long term decline in the total rod catch of spring salmon suggests that the populations associated with this stock component may be particularly weak although it has stabilised in recent years.

Catch And Effort Reported By Scottish Salmon Fisheries In 2012