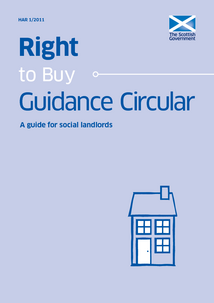 1. The purpose of this guidance is to provide comprehensive advice on the Right to Buy ( RTB) in Scotland with particular reference to how RTB applies in Scotland after the introduction of the changes contained in the Housing (Scotland) Act 2010 ("the 2010 Act"). The guidance consists of:

2. This circular is not a legal document and does not deal with every issue which might arise under the legislation governing the RTB. Social landlords will wish to obtain legal advice on interpretation of the relevant legislation, where necessary. In the event of a dispute, it is for the courts to decide the matter.

3. The legislative basis for the RTB is the Housing (Scotland) Act 1987 ("the 1987 Act"). RTB reforms were previously introduced in the Housing (Scotland) Act 2001, which amended certain provisions in the 1987 Act. Significant parts of the 1987 Act remained unchanged, for example, the provisions relating to application procedures. Others were amended ( e.g. discounts, qualifying periods and exemptions) or repealed ( e.g. rent to loan, lender of last resort). A range of new provisions setting out various limitations on the RTB ( e.g. pressured areas) were introduced. These changes were explained in SEDD Circular 5/2002, which is superseded by this circular.

4. The 2010 Act introduces further reforms to the RTB provisions. It ends the RTB for most tenants new to the social housing sector or returning after a break and for most new supply social housing. It also amends the existing pressured area provision in section 61B of the 1987 Act.

5. In line with Ministerial policy intentions, the changes introduced by the 2010 Act do not generally affect the RTB entitlement of tenants who had such an entitlement before 1 March 2011.

The guidance in this circular relates to the statutory RTB. In addition, landlords in the social housing sector may, if they so wish, consider disposing of houses to sitting tenants on a voluntary basis, for example where a tenant has been the victim of anti-social behaviour ( see Part 2). The powers of local authorities in this area are set out in section 14 of the 1987 Act. The relevant provisions relating to registered social landlords ( RSLs) are in sections 65 to 68 of the 2001 Act and currently require the consent of Scottish Ministers; once section 107 of the 2010 Act is commenced the consent of the Scottish Housing Regulator will be required instead. Landlords may wish to seek appropriate legal advice if they are planning voluntary sales to sitting tenants.