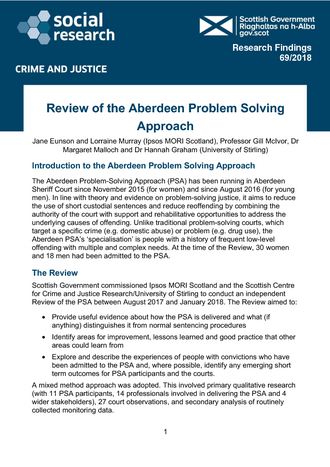 The Aberdeen Problem-Solving Approach ( PSA) has been running in Aberdeen Sheriff Court since November 2015 (for women) and since August 2016 (for young men). In line with theory and evidence on problem-solving justice, it aims to reduce the use of short custodial sentences and reduce reoffending by combining the authority of the court with support and rehabilitative opportunities to address the underlying causes of offending. Unlike traditional problem-solving courts, which target a specific crime (e.g. domestic abuse) or problem (e.g. drug use), the Aberdeen PSA’s ‘specialisation’ is people with a history of frequent low-level offending with multiple and complex needs. At the time of the Review, 30 women and 18 men had been admitted to the PSA.

Scottish Government commissioned Ipsos MORI Scotland and the Scottish Centre for Crime and Justice Research/University of Stirling to conduct an independent Review of the PSA between August 2017 and January 2018. The Review aimed to:

How problem-solving works in practice

Potential PSA participants are screened by Criminal Justice Social Work ( CJSW) using lists of people released on undertakings and people subject to appear from custody. They have to meet the 10 specific eligibility criteria for the programme,which include:

Those admitted into the PSA have their sentence deferred while they engage with service providers for a specified period of time, during which they must return to court for regular judicial reviews with a dedicated sheriff.

Key distinguishing features of the PSA, compared to the way other community sentences are used in Aberdeen, include:

Furthermore, participants – including those who were back in custody – were overwhelmingly positive about the PSA’s overall impact on their lives. Professionals were also very positive about the PSA overall – while acknowledging that it was less successful for those with more entrenched problems and who were not yet ready to change.

Positive outcomes self-reported by participants included: reduced reoffending, reduced substance use, improved housing situations, improved mental health and wellbeing; and improved social skills and relationships. Professionals also observed these outcomes – although, as noted above, they acknowledged that the PSA was less successful for those with more entrenched problems.

The barriers to successful completion identified by both professionals and participants were not, in the main, problems caused by the way the PSA operates. They were: the complexity of participants’ problems; unstable substance use; the influence of family and associates; the intervention not coming at the right time in terms of readiness to change; and lack of access to services and support (such as housing and mental health services).

The main areas for future consideration or improvement identified in the Review were:

The Review also identified key learning points for stakeholders in other areas to consider. These included:

Setting up a problem-solving court

Making it work in a local context

The PSA in Aberdeen has been successfully implemented and is running as intended (albeit with lower numbers than were originally anticipated). Both elements – intensive support paired with accountability through court reviews – are important in supporting participants to address the causes of, and reduce, their offending.

Overall, the PSA shows promise and we recommend that Community Justice Partners in other parts of Scotland give consideration to the benefits of a problem-solving approach in Scottish courts. In doing so, the local context, in comparison with Aberdeen, should be taken into account. Given the lack of robust impact measures currently available, it will be particularly important that robust monitoring and evaluation processes are built into any new pilots, to continue to grow the Scottish evidence base.