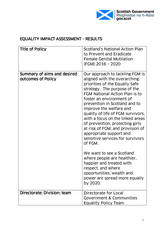 FGM is an extremely harmful practice with devastating short and long term health consequences for girls and women. It is considered a form of violence against women and girls and a violation of their human rights and has been unlawful in Scotland since 1985.

Our approach to tackling FGM is aligned with the overarching priorities of the Equally Safe strategy. The purpose of the FGM National Action Plan is to foster an environment of prevention in Scotland and to improve the welfare and quality of life of FGM survivors, with a focus on the linked areas of prevention, protecting girls at risk of FGM; and provision of appropriate support and sensitive services for survivors of FGM.

To ensure we are doing everything we possibly can to tackle this practice in Scotland , the Scottish Government is committed to working with all of its partners in the statutory and third sectors and affected communities to progress a range of interventions targeted at preventing FGM.

Tackling all forms of inequality is very much at the heart of Scottish Government policy since the publication of the Programme for Government agendas, and the publication on 25 June 2014 (updated March 2016) of Equally Safe: Scotland's strategy for preventing and eradicating violence against women and girls (including FGM).

The aim of Equally Safe is to, prevent and eradicate violence against women and girls, create a strong and flourishing Scotland where all individuals are equally safe and respected, and where women and girls live free from abuse – and the attitudes and behaviours that help perpetuate it.

The Equality Act 2010 and the Public Sector Equality Duties have revitalised equality work, not just within the Scottish Government itself but across Scotland's public sector. The Scottish Specific Equality Duties enacted by the Scottish Parliament in 2012 brought opportunities to make improvements and to share good practice, and activity under the Scottish Ministers Duty to support public bodies in meeting their obligations has sought to make this work ever more effective.

The equality work undertaken in the public sector also supports Scotland's obligations under both domestic and international equality and human rights legislation.

However, the Scottish Government acknowledges that inequalities remain in many areas of life for people in Scotland, particularly people in minority ethnic communities. Many people from these minority ethnic communities continue to face higher risks of poverty and in-work poverty, lower employment rates, and under-representation in political and public life as a whole. It may also be thought that drawing attention to a certain ethnicity may lead to further profiling.

Through our extensive engagement programme with minority ethnic individuals and communities in 2015, in developing the race equality framework, and resonating with our Healthier Scotland National Conversation, we also heard about what matters to people when thinking about their health and the future of health and social care services - in particular in relation to leading healthy lives; access to services; wellbeing, mental health and social connectedness, and person-centred care.

One of the key Goals within the Race Equality Framework has been developed with related actions to address this, and this very much aligns with Scotland's FGM National Action Plan:

Our stakeholders identified that a good understanding of issues around racial inequality and racism is also necessary to deal with any incidents which may occur in a health and social care environment, or in any public service. Both service users and staff from minority ethnic backgrounds are at risk of facing both direct and subtle forms of racism; public service organisations need to be able to take appropriate action where this occurs.

We have developed actions to encourage public sector employers to provide opportunities for their staff to participate in training on equality, diversity and human rights, including race equality and intercultural competency training, and have also undertaken to work with relevant bodies to take positive action to encourage a greater representation of the minority ethnic population within the public sector workforce.

These actions complement and will facilitate the achievement of the related actions in the FGM Action Plan.

To address the inequality experienced across all sectors of society the Scottish Government and its partners have developed Scotland's National Action Plan to Prevent and Eradicate Female Genital Mutilation ( FGM) 2016 – 2020 with the aim of providing a broad platform to encourage further engagement of minority ethnic communities, and emphasising that communities affected the practice are well placed to inform the solutions to tackling it.

The Scottish Government has worked in partnership with a range of statutory, third sector and community based agencies and organisations to develop the National Action Plan ( NAP) to tackle FGM that is innovative, challenging and ambitious in scope.

The actions, activities and outcomes of the NAP build on the range of work already being taken forward by the Scottish Government and its partners in both the statutory and third sectors, and at community level, to tackle this unacceptable practice.

A number of engagement activities were used to ensure that a wide range of organisations and individuals, from grassroots community organisations to practitioners working in the public sector, had an active role in contributing to the National Action Plan.

In response to the recommendations of Tackling FGM in the UK Intercollegiate recommendations for identifying, recording and reporting, a Female Genital Mutilation Short Life Working Group ( FGM SLWG) was established with its first meeting being held on 29 August 2014.

The main aim of the FGM SLWG was to encourage the multi-agency approach to be taken in Scotland towards the elimination of the practice of FGM, taking account of the needs of victims, professionals, support agencies and organisations and communities who practice FGM, and also to identify priorities and solutions in line with four thematic areas; An Overarching Objective; Prevention; Protection; Provision of Services.

An FGM National Action Plan National Implementation Group facilitated by the Scottish Government and with representation from the agencies, organisations and communities that informed the report will oversee implementation and monitor its progress.

Each organisation involved will be expected to develop their own implementation plan, involving their FGM leads and other partner agencies, including local third sector and community development organisations, as appropriate. This should include indicators to demonstrate progress towards output, outcomes and timescales agreed in the NAP.

This EQIA process for the Scotland's National Action Plan to Prevent and Eradicate Female Genital Mutilation ( FGM) 2016 – 2020 and the Multi-Agency FGM National Guidance has helped to identify various activities and actions to tackle this unacceptable practice in Scotland. In particular, the engagement process highlighted the need for more awareness raising campaigns and adequate training for frontline staff who will be the first point of contact for some survivors.

Discrimination and barriers in accessing health services and resources were of particular concern to participants. In relation to broader issues, participants wanted to see action to tackle the lack of understanding of legislation in Scotland, raising awareness of children's rights and gender equality in general, more investigation into gender based violence without stigmatisation and frontline practitioners being able to competently identify FGM and respond appropriately.

Publication of the NAP is only the first step. As we move into the implementation stage, we will continue to engage with our stakeholders and Scottish Government colleagues to develop the actions and activities so they can be tangibly measured and achieved. We will also continue to work very closely with affected communities to develop the most effective methods of engagement, and encourage community members to talk about their experiences to de-stigmatise this practice.

The findings of this EQIA were negotiated and agreed with multi agency professionals and community organisations. The Scottish Government has worked hard to develop and maintain these valuable relationships and will continue to build on these moving forward into the implementation stage. This will provide a vital link because we believe the solution to the elimination of this practice lies within the communities potentially affected by it.