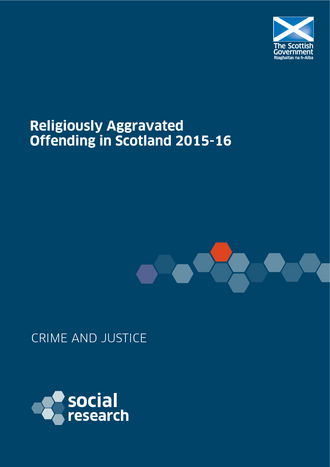 In 2015-16, 581 charges were reported with a religious aggravation under section 74 of the Criminal Justice (Scotland) Act 2003. This is a slight increase of 3% from the 566 charges reported in 2014-15. Prior to this, religiously aggravated charges had been steadily decreasing from a peak of 896 charges in 2011-12. The figures for the five years prior to 2011-12 were relatively stable, with between 600 and 700 charges reported each year.

These trends may have been influenced in the last four years by the separate use of charges under section 1 of the Offensive Behaviour at Football and Threatening Communications (Scotland) Act 2012 ( OBFTC). This legislation came into force on 1 st March 2012, and, among other things, criminalises religious hatred that is connected to football. It may be used instead of section 74 in certain circumstances. There were 50 additional 'religious' charges [1] under this legislation during 2015-16. When all legislation is considered (i.e. when section 74 charges are added to the section 1 and 6, offensive behaviour at football and threatening communications charges) there is a total of 631 charges relating to religious prejudice in Scotland in 2015-16 (a slight increase from 614 (3%) in 2014-15).

The number of charges with religious aggravations recorded in Glasgow, the local authority with the highest proportion of charges (30%), decreased by 11% - from 197 charges in 2014-15 to 176.

The number of football-related section 74 charges (e.g. if the police noted the relevance of a football association within the description of the charge) has decreased since last year, from 64 charges in 2014-15 to 50. The number of charges occurring in football stadiums is similar; there were 16 charges in stadiums in 2014-15 and 15 in 2015-16.

Again this reduction may also have been due to the use of OBFTC, which counted for an extra 50 religious charges related to football in 2015-16. In total there were 100 football-related charges that contained religious prejudice, when both section 74 (religious aggravation charges) and the relevant parts of the offensive behaviour at football legislation are considered (this is an 11% decrease from the 112 football related charges in 2014-15).

There was an increase in the number of charges where workers were the victims: from 85 in 2014-15 to 99. The 'workers' category includes hospital staff, security staff, shop workers, taxi drivers, takeaway servers, and religious officials [2] .

Many cases are on-going and information about final convictions will be presented in Scottish Government 'criminal proceedings' publications [3] . Provisional data shows that of the 295 concluded charges 251 resulted in a conviction (85%).