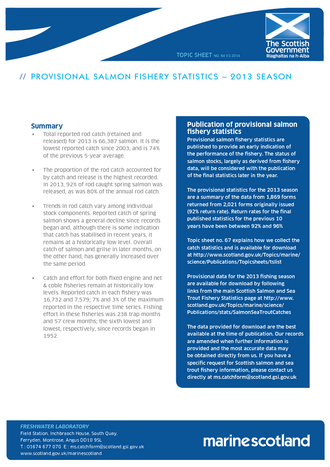 The proportion of the rod catch accounted for by catch and release is the highest recorded. In 2013, 92% of rod caught spring salmon was released, as was 80% of the annual rod catch.

Trends in rod catch vary among individual stock components. Reported catch of spring salmon shows a general decline since records began and, although there is some indication that catch has stabilised in recent years, it remains at a historically low level. Overall catch of salmon and grilse in later months, on the other hand, has generally increased over the same period.

Catch and effort for both fixed engine and net & coble fisheries remain at historically low levels. Reported catch in each fishery was 16,732 and 7,579; 7% and 3% of the maximum reported in the respective time series. Fishing effort in these fisheries was 238 trap months and 57 crew months; the sixth lowest and lowest, respectively, since records began in 1952.