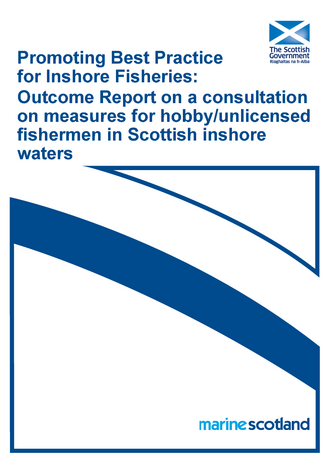 This report summarises responses to questions posed in the Consultation on measures for hobby/unlicensed fishermen in Scottish inshore waters and provides an analysis of the views received and highlights areas of consensus and divergence. Marine Scotland's next steps are also given. The consultation ran from 30 January 2015 to 31 May 2015.

The Inshore Fisheries Management and Conservation Group ( IFMAC) established a short-life working group to discuss the issue of hobby/unlicensed fishermen and report back with possible actions to reduce the incidence of unlicensed fishing.

Fishing vessels that fish commercially and land their catch for profit in the UK must firstly hold a valid Certificate of Registry and be registered with the Register of Shipping and Seamen at Cardiff. In addition they must also hold a valid UK fishing vessel licence issued by a UK Fisheries Administration.

The licence specifies conditions which must be adhered to by vessel owners when fishing activity is being pursued. It authorises the sea areas in which a vessel can fish and the species of fish that can be targeted, and is the mechanism of control that enables UK Fisheries Administrations to regulate fishing under the quotas ( TACs) set and allocated annually to the UK under the EU Common Fisheries Policy.

By its very nature, the illegal selling of catch for profit by hobby/unlicensed fishermen is difficult to measure; however, there is evidence to suggest this is a significant issue around the Scottish coast in particular hotspots. The problem also increases during spring/summer months.

There is also evidence to suggest that the problem exists in relation to fishing for crabs and lobsters with creels and also in relation to diving for scallops - which can be harder to monitor as this activity can be undertaken from beaches etc.

Current EU legislation allows fishing for personal consumption but does not define what this means. Reports have been received of unlicensed creelers using hundreds of pots and scallop divers collecting several large sacks of scallops in one day's fishing.

EU legislative provisions require that all fisheries products (subject to the exception noted below), are first marketed or registered at a registered auction centre or to registered buyers or to producer organisations. Registration is free. However, a buyer acquiring fisheries products of an amount up to 30 kg which are not placed on the market but are used only for private consumption are exempted from this requirement.

There are safety issues in relation to unlicensed fishermen as they may not have the relevant safety certificates or be complying with best practice. There are also public safety and health concerns due to the untraceability of produce and the possibility of shellfish being sourced from areas affected by toxins, particularly if harvested from waters that have not been tested for toxins and classified as safe.

Over fishing and non-compliance with regulations on landing sizes may impact on the long term sustainability of stocks. When licensed fishermen see unlicensed fishermen selling their catch for profit without any apparent hindrance to their efforts they believe there is not a level playing field. As a result, it can be difficult to persuade commercial fishermen to embrace voluntary activities such as data gathering or management measures that can have a long term benefit for the fishery.

1. The IFMAC working group identified a number of possible actions to reduce the incidence of unlicensed fishermen selling their catch for profit which can be broadly split into two distinct areas:

It is the legislative options that Marine Scotland sought views on in this consultation which was launched on 30 January 2015. Following a 5 week extension the consultation closed on 31 May 2015.

The consultation sought views on eight points. The first question requested views on introducing a permit system for hobby fishermen.

Question 1: Should a permit system be introduced for fishermen not fishing from a licensed fishing vessel?

The second and third question sought views on creel limits and tagging.

Question 2: Should a maximum limit be set for the numbers of creels that can be set by unlicensed/hobby fishermen?

Question 3: If you have answered 'Yes' to Question 2, what should be the maximum number of creels that can be set by a hobby fishermen?

The fourth and fifth questions were in relation to landing limits.

Question 4: Should daily catch or landing limits be introduced for certain species?

Question 5: If you have answered 'Yes' to question 4 what species should be covered and what do you consider to be an acceptable limit for each species for hobby fishermen to land?

The sixth question sought views on the use of keep boxes.

Question 6: Should the use of keep boxes by unlicensed / hobby fishermen be banned?

The final questions sought views on whether personal consumption should be defined in law.

Question 7: Should legislation define what is meant by 'personal consumption'?

Question 8: If you answered 'yes' to Question 7, how should 'personal consumption' be defined - by weight or number, depending on species, or by some other means?

The consultation set out the background to each question and sought views on proposed changes.

Consultation Responses and Next Steps