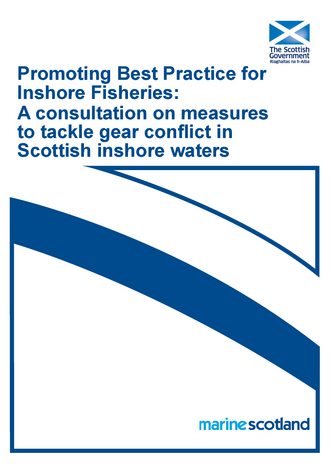 Scottish inshore waters extend from the baseline of the coast to 12 nautical miles (nm) with the majority of the fleet active inside 6 nm. The inshore fleet is diverse and ranges from trawlers to creelers, dredgers to netters, and divers and hand gatherers whose total first sale catch value in 2012 was nearly £90 million. Comprised of approximately 1,500 vessels, often smaller boats (typically 8-10 metre in length) with one or two man crews, quite often working part-time and with a restricted geographic range.

Gear conflict is not an endemic issue in Scottish waters but as the intensity of use of the marine environment has increased, locally significant occurrences have increasingly come to the attention of Marine Scotland. Gear conflict can occur both within and between fleet sectors and is not conducive to the aim of ensuring fisheries are well managed.

This consultation is an open discussion on proposals that could be introduced to tackle the issue of gear conflict in Scottish inshore waters. Marine Scotland recognises the right of every fisherman to earn a living from the sea through legal and sustainable means, no fleet sector or gear type having primacy over another. We want to see the removal of barriers to inshore fishermen making a sustainable and profitable living in harmonious co-existence with other users of the marine environment. Where there are measures that can promote better fisheries management and cooperation between sectors they should be encouraged.

Marine Scotland has an open mind on these proposals to tackle gear conflict and believes that voluntary agreement reached locally between protagonists, without the need for intervention by government or other agencies, is, where possible, the best route to resolution of conflict situations. But it is clear that improvements need to be made. This is backed up by the report from the Task Force on gear conflict which reported to Ministers in July 2014. This consultation is the first time that the fishing industry has been asked to consider measures to improve the prevention, deterrence and detection of gear conflict in Scottish inshore waters. This is a complex problem with no simple solution and whatever changes are introduced have to be proportionate to the fleet and regulators.

While gear conflict is a policy issue which requires a dedicated solution it is important to be cognisant of how this fits into the wider inshore management of Scottish fisheries. The Inshore Strategy has at its core the requirement for improving the evidence base through better data collection on fishing vessel activities. Where it is feasible Marine Scotland will seek to promote local initiatives for fisheries management. Consequently any measures intended to tackle gear conflict will need to complement these strategic aims, as well as the requirement to sit within a formal framework for good governance.

Section 2 - Background on the Consultation Process