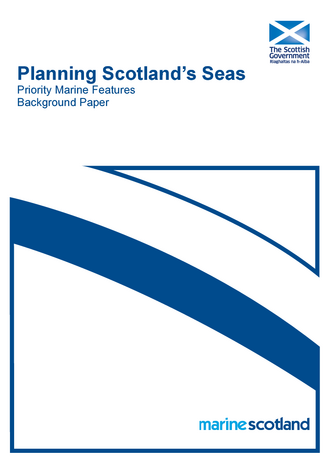 The recommended list of Planning Scotland’s Seas Priority Marine Features Background Paper ( PMFs) represents 80 habitats and species of marine conservation importance for which it would be appropriate to use both area based and non-area based mechanisms to achieve better protection, and for which action will be prioritised via a three-pillar approach, i.e. species measures, site-based measures, and wider seas policies and measures as set out in Marine Scotland's Marine Nature Conservation Strategy [1] .

The PMF work brings a Scottish focus to existing marine species and habitat listings, and will be used to help target conservation work in Scotland’s seas more effectively.

This list reflects current knowledge and understanding and will be subject to periodic review to take account of the best available evidence.

There are a number of species and habitats lists which have been developed at a Scottish, UK and international level with the purpose of directing nature conservation action. These include lists in EC Directives, domestic legislation, Biodiversity Action Plans and the OSPAR list of threatened or declining habitats and species. The concept of Planning Scotland’s Seas Priority Marine Features Background Paper is not intended to replace these lists but provides a new focus for marine conservation activities across the three pillar approach.

To focus work in the seas around Scotland, Scottish Natural Heritage ( SNH) and the Joint Nature Conservation Committee ( JNCC), on behalf of the Scottish Government, have considered the marine features on these lists in order to develop a list of Planning Scotland’s Seas Priority Marine Features Background Paper for inshore and offshore waters.

The list will be used to support advice on marine biodiversity, guide future research priorities and help deliver marine planning and licensing systems set out in the Marine (Scotland) Act which delivered new powers to protect other habitats and species of national and international importance.

A subset of the PMFs, including basking shark, horse mussel beds, seamount communities and fan mussels, are being used to support the selection of a network of Nature Conservation Marine Protected Areas ( MPAs) as outlined in the Scottish MPA Selection Guidelines [2] .

To identify the list of recommended PMFs in Scottish waters, SNH developed a list for Scottish territorial waters and the JNCC undertook equivalent work for Scottish offshore waters.

In order to produce the list, referred to as the PMFs list, species and habitats on existing conservation schedules were assessed against criteria that considered whether a significant proportion of their population occur in Scotland’s seas, whether they are under threat or in decline and the functional role they play.

The first three stages of each project covered the initial compilation of a long list of features from existing conservation mechanisms, the streamlining of this list to ensure that only those features occurring within Scottish territorial and offshore waters remained on the lists and the development of criteria for assessing their importance.

A criteria-based approach was developed in order to refine the initial long-list of species, and six criteria were considered:

The first three of these were used together to determine if a feature was to remain on the list of Planning Scotland’s Seas Priority Marine Features Background Paper and to produce a provisional short list of features. A grouping exercise was then carried out on those features that were to remain on the list in order to arrange similar features together. A final filtering of the list involved removing overlapping or duplicate habitat types and a number of species which were represented by specific habitats. Further detail on the processes followed to identify PMFs in Scottish territorial waters and offshore zone is available through reports published by SNH [3] and JNCC [4] .

The offshore and territorial waters lists have recently been combined into a single recommended list of Planning Scotland’s Seas Priority Marine Features Background Paper in Scotland’s seas [5] . The list (covering seabed habitats, low or limited mobility species, and highly mobile species) represents SNH and JNCC recommendations on features to be included as PMFs in Scotland’s seas. The list highlights whether the features are of particular interest in territorial waters or the Scottish offshore zone (or both).

We seek views on the recommended species and habitats to be included as PMFs in Scotland’s seas, prior to the list being considered for formal adoption by Scottish Ministers.