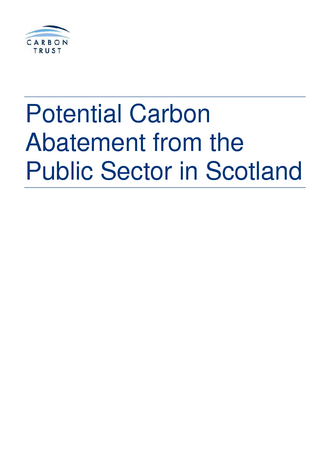 As part of the RPP2 process, the Scottish Government commissioned the Carbon Trust to estimate the carbon abatement potential of the Scottish public sector.

The study had three main objectives:

Including all the sources covered in the CMPs - principally emissions from electricity and fossil fuel consumption in buildings, emissions from owned transport and waste emissions - total emissions are 3.4 million tonnes of CO 2 per annum. Local authorities account for around two thirds of the total. Buildings is the largest source category, accounting for c. 65%, followed by waste and transport at 17% and 13% respectively.

For the RPP2 process it was necessary to create a second baseline figure excluding emissions sources counted elsewhere in the process (traded emissions, transport and waste). Excluding these sources reduces the baseline to 0.98 million tonnes. Of this reduced ' RPP2' baseline, 98% is generated by buildings (on-site fossil fuel consumption). Local authorities account for c. 60%.

To estimate the abatement potential from the public sector, two methods were used. The first analysed the carbon reduction projects included in the CMPs (each plan contains a list of quantified projects). It was possible to analyse the projects from 67 of the CMPs available, amounting to c. 1,350 separate projects and around 250 thousand tonnes of CO 2. Of these around half relate to the reduced ' RPP2' baseline (excluding measures which impact emissions from the traded sector, transport or waste). Each project's emissions reduction impact was calculated as a % of the emissions baseline of that organisation and it was assumed that all organisations from the same sector could make similar reductions by implementing similar projects. In total this would amount to a 39% reduction against the RPP2 baseline. The categories of behaviour change, building fabric and renewables offer the largest reductions vs the baseline.

The second method used the Carbon Trust's proprietary database of carbon reduction recommendations made to customers. This contains records for c. 5,000 recommendations made to Scottish public sector bodies, amounting to nearly 700 thousand tonnes of CO 2 of annual savings and more than 6 million tonnes over the full lifetime of the measures (including all emissions). Behaviour change, renewables, HVAC and building fabric are the largest categories in terms of total emissions reduction. The projects in the database aggregate to a total % reduction of 29% against the RPP2 public sector baseline.

These estimates of potential assume that 100% of identified projects are implemented. In the Carbon Trust's experience, not all recommendations made to organisations actually get implemented, even those with short payback periods. A number of cultural, financial and organisational barriers stop good projects from getting implemented. The most significant barriers for the public sector in Scotland are:

These barriers will need to be addressed to realise the full, currently identified abatement potential.

The abatement potential identified in the CMPs and the Carbon Trust's database is biased towards immediate, relatively short payback opportunities. Once those have been implemented, there remain substantial opportunities for further reduction. Some of the main areas of potential are: