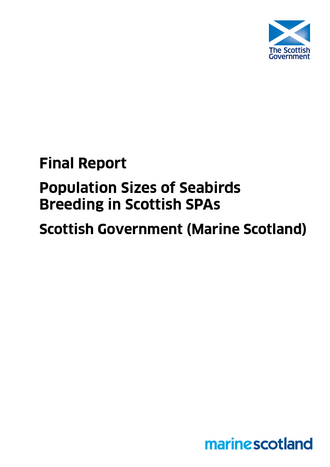 For proposed renewable developments in the marine environment, accurate SPA population estimates are required to inform the EIA process. Citation data for SPAs are often out of date as much of it is from the early 1990s, with some of it dating back to as early as 1970. As such, Natural Power Consultants ( NPC ) was commissioned by Marine Scotland to collate existing data on SPA populations breeding around the Scottish coast (from JNCC, SNH, RSPB & other sources), with a view to:

It is of key importance to note that the purpose of this collation of data for Marine Scotland is to help inform renewable developers, rather than acting as a specific review of SPAs.

The task was originally to include all features of ' SPAs with marine components'. However, a 'marine component' of an SPA refers to a species that is dependent on a marine habitat, such as a sea inlet, estuary or mud flats, or salt marsh. A total of 119 species of birds are listed by JNCC as being dependent on marine environments, including wildfowl, divers, grebes, waders, true seabirds, and certain species that can occupy littoral habitats such as short-eared owl, kingfisher, and twite. Therefore, Marine Scotland focused the scope of the work towards species which are more frequently recorded in locations proposed for offshore renewable developments (offshore wind, wave & tidal schemes), the list of species to be considered was restricted to SPA populations of true seabirds (petrels, shearwaters, northern gannet, great cormorants, skuas, gulls, terns, and auks) that relied on marine habitats during the breeding season. The list drawn up comprises the following species:

Outputs from the collated data include: