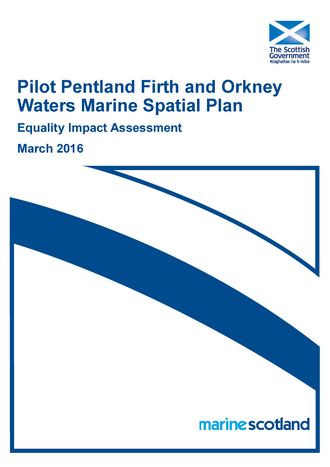 The pilot PFOW MSP sets out policies to guide and inform developers, users and regulators on how the resources in the marine environment should be used. The Plan also aims to pilot the regional marine planning process in order to guide the preparation of future Regional Marine Plans. The policies in the Plan will therefore have implications on:

The Plan will affect a variety of people with an interest in carrying out both licensable and non-licensable activities in the Pentland Firth and Orkney Waters marine area , however we currently have no information to suggest that the Plan will have any significant detrimental effect on the basis of characteristics protected in equalities legislation (so-called 'protected characteristics'). This includes age, disability, sexual orientation, gender, race or religion and belief.

The Pentland Firth and Orkney Waters are used by a wide range of marine users and for a variety of activities. A vast majority of the Plan area is used for multiple activities and so there is potential for competition and conflict. Poor management of the area could result in costs and uncertainty for developers and marine users which could have a negative impact on progress towards fulfilling Scottish Government national outcomes in the area. The National Marine Plan (and the policy framework it sits within) has provided for a system of statutory Regional Marine Plans to aid in the management of the marine environment. This non-statutory pilot Plan precedes the statutory Regional Marine Plans.

The pilot Plan has been developed to trial the process of creating the statutory Plans and to inform the Marine Planning Partnerships which will be formed to produce them. In this way the production of this document will contribute to the effective preparation of the Regional Marine Plans. In addition to this, the pilot Plan will be used as a material consideration in the existing planning and consenting process, directly improving the clarity and guidance given to developers and regulators in the Pentland Firth and Orkney Waters.

A number of sectors may be affected by the adoption of the pilot PFOW MSP:

However, at the scale of this Plan it is impossible to distinguish any difference in the potential effects on the basis of protected characteristics.

It was determined as part of the framing exercise that the pilot Plan would have minimal relevance to equality and therefore a light touch assessment could be be taken with this EQIA .

"Do you believe that the creation of, or any policy contained within, the pilot Pentland Firth and Orkney Waters Marine Spatial Plan discriminates disproportionately between persons defined by age, disability, sexual orientation, gender, race or religion and belief?"

"If yes, in what way do you believe that the creation of a pilot Pentland Firth and Orkney Waters Marine Spatial Plan is discriminatory?"

No comments were received in either consultation which suggested that proposals for a pilot PFOW MSP would have a differential or discriminatory impact on the basis of protected characteristics.

We currently have no information to suggest that the pilot PFOW MSP will have any significant detrimental effect on the basis of protected characteristics. No changes are therefore required to the Plan as a result of this EQIA.