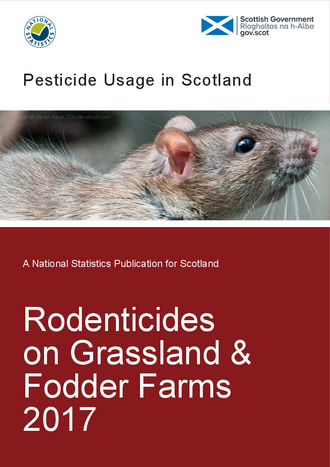 This report presents the results of a survey of rodenticide use on Scottish farms growing grass and fodder crops in 2017. Information was collected from 635 holdings, which collectively grew 12 and four per cent of the 2017 fodder and grass crops respectively. Data from this sample were used to estimate total Scottish rodenticide use in this crop sector.

In 2017 an estimated 130 tonnes of rodenticide products were used on grassland and fodder farms. This is a decrease of 40 per cent since 2013. There was a similar decrease (30 per cent) in rodenticide use on arable farms between 2012 and 2016. The products used in 2017 contained less than 7 kg of rodenticide active substance. As in previous surveys, almost all products used (> 99 per cent) were second generation anticoagulant rodenticides, primarily bromadiolone and difenacoum (96 per cent by weight).

The majority of rodenticides (54 per cent) were applied throughout the year, either used permanently or as multiple individual baiting operations. This is a reduction in year round use from 2013 (75 per cent). Most rodenticides were used in autumn and winter (69 per cent). Grain baits were the most common product type (88 per cent) and the main targets were rats (57 per cent) or a combination of rats and mice (39 per cent). Fifty six per cent of farms that did not use rodenticides, and 45 per cent of those that did, employed non-chemical rodent control; the most common methods were cats and traps.

Respondents were asked about rodenticide stewardship, training attainment, compliance with best practice and aspects of their farm operation. Sixty one per cent of farmers were aware of rodenticide stewardship, of these seven per cent had completed stewardship compliant rodenticide use training and 32 per cent planned to in future. As in previous surveys, significantly more PCPs had completed training than farmers. In relation to best practice, the majority of both farmers and PCPs stated that they complied with all elements, and responses were very similar to those reported in 2013. Whilst a higher proportion of PCPs reported compliance, the only significant difference was that farmers were less likely to search for and remove rodent carcasses. In relation to farm operation, farmers that practised rodenticide baiting were significantly more likely to be members of a quality assurance scheme and to have a grain store than farmers that did not use rodenticides.

This survey is the first in this series to be conducted since the industry led stewardship scheme was introduced in 2015 and HSE rodenticide product reauthorisations were re-issued in 2016 and 2017. Changes in reported use pattern may have been influenced by stewardship and regulatory changes.