Older People and Employment in Scotland

"The old age dependency ratio (number of pensionable age people per 100 working age people) in Scotland is projected to increase from 31% to 40% between 2014 and 2040."

This demographic change has prompted much policy attention on extending working lives beyond traditional retirement ages.

Promoting fair work opportunities for an ageing population could:

Employment among older people in Scotland is increasing

So.... there is significant potential for growth in the employment rate of older people

Overemployment of older people aged 50-64 has been steadily increasing. This suggests that older people may wish to reduce their working hours while remaining in employment.

This study is a research commitment in the Fairer Scotland Action Plan.

"To be honest I don’t really need to work just now, but I’m doing it for company and for getting a purpose to get up." (male employee, aged 70)

For financially secure older people, working longer is a choice.

"It feels a wee bit like an anchor or ball and chain, work at the moment. And it’s purely financial." (female employee, aged 62)

For poorer older people, working longer is a necessity.

"I don’t think they recognise or respect the experience and skills that you come with at this age." (female employee, aged 62)

Older people were proud of their skills and experience yet feared potential age discrimination from prospective employers.

"I’ve got bits of pensions all over the place... I need to just get my head down and pull them together, and find out exactly where I am with them and when I can retire." (female employee, aged 53)

Many people faced uncertain futures, with insecure jobs and a lack of information about options for work or pensions.

Employers valued the skills and experiences of older people BUT were concerned about adopting specific policies or practices for older workers, for fear of being viewed as ageist.

"There’s nothing specific in place but it would just be open to everyone of all ages." (National public body)

Good practice amongst employers in the study

What do older people need?

How older people and employers thought the Scottish Government could help 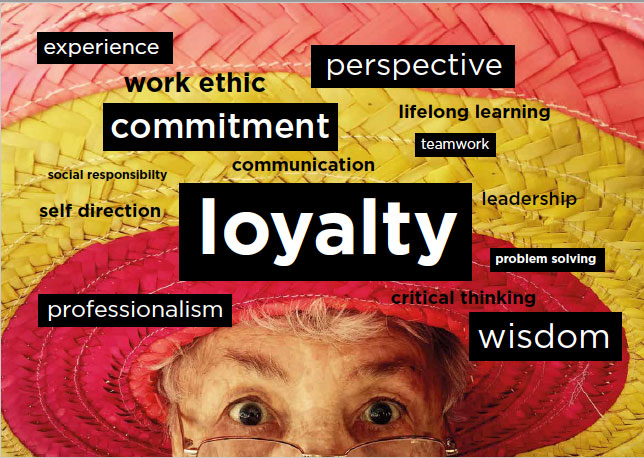